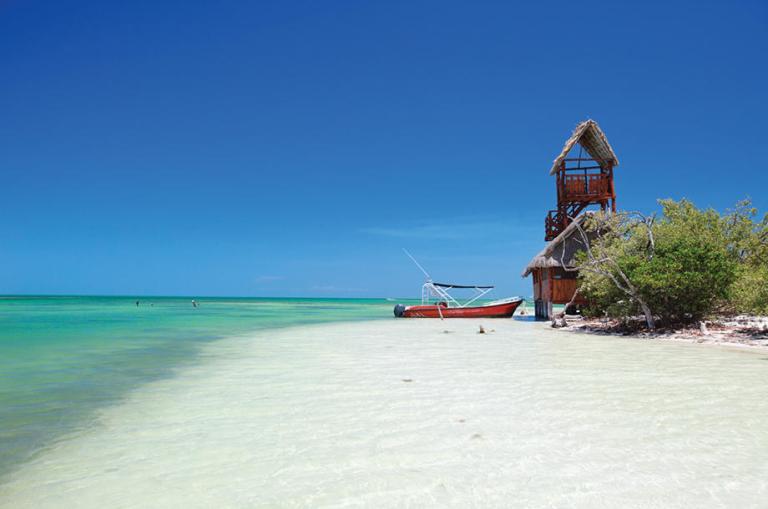 Holbox (“black hole” in Maya) is an island in Quintana Roo, on the north coast of the Yucatán Peninsula. It is approximately 41.8 kilometers (26 miles) long and 1.6 kilometers (1 mile) wide, and is separated from the mainland by a shallow lagoon that is home to flamingos, pelicans and other rich bird-life, The Yucatan Times reports.

The island is accessed by ferry from the mainland town of Chiquila, and has virtually no cars, with transport by most residents and tourists by golf cart or moped. Its main industry is fishing, although the island has recently developed a growing tourist industry in the form of whale shark viewing.

Holbox is part of the Yum-Balam Biosphere Reserve. In short, a beautiful Eden, surrounded by the sea in a myriad of tones of blue and green, and considered one of the last sanctuaries in the Mexican Caribbean.
Holbox is also well known as one of the safest beaches for learning how to kite-board. Conditions are ideal for beginners: shallow waters, no big obstacles on the long wide beach, many days of wind all year long, and an onsite kite-boarding school with professional instructors. Advanced riders will also find conditions ideal for enjoying the sport.

But the virginal beaches of Holbox with its emerald waters and soft clean sand appears to be under attack, threatened by the real estate firm known as Peninsula Maya Developments, SA de C.V., owned by Yucatecan businessmen.
The Corporation has been planning to radically change and transform Holbox into a Mega Touristic Complex with hotels, condos, villas, golf courses, heliports and shopping centers, named “La Ensenada”.
Recently the Ministry of Environment and Natural Resources (SEMARNAT) ordered an environmental assessment of this project, and warned that the project could be rejected for its negative impact on the cycles of migratory species that inhabit the island and the rest of the ecosystem.

As a result of the study, the state delegate of SEMARNAT, Omar González Castilla, now reports that the company has decided to abandon the development project known as La Ensenada.
The assessment of that development had been taken up by SEMARNAT last week, a fact that triggered a series of protests on social networks.

Damage to the environment
It is estimated that construction of La Ensenada on Isla Holbox would result in 109 negative environmental impacts, including air pollution, excessive noise, damage to the hydrology of the site, and damage to soil, landscape, flora and fauna on the island.

This Mega Project was planned for an area of 980 hectares, of which 93.2 hectares, (9.51%), was for the development, and the remaining 886.8 hectares, (90.49%) of the total area-would be kept intact, according to the Environmental Impact of the project.

The document stated that three hotels were to be built over an area of ​​8.65 hectares. Another large area of ​​114 hectares would provide for the sale of real estate, a commercial area, two golf courses, canals, roads and a marina for 200 boats. The planned investment stood at 3.2 billion USD.

The conflict does not end with the cancellation of the project as there are still disputes over the ownership of valuable land on the island of Holbox, which is within the protected wildlife area of ​​Yum Balam.
The origins of this conflict reach back to the early years of the Felipe Calderon administration (Calderon was in office from 2006 to 2012).

In late 2005, Yucatecan entrepreneurs presented proposals to the inhabitants and land owners on the island of Holbox (ejidatarios), to form a trust for the promotion and development of a sustainable project.
In January 2006, the entrepreneurs succeeded in 65 of the 116 of the cases, forcing the ejidatarios on the big island of Holbox to sign documents that actually ceded their rights to over 300 acres of shoreline. JP Morgan acted as trustee for the transaction, with the power to sell the land to the highest bidder.

An avalanche of allegations of theft and fraud continue being aired in the State Agrarian court.
Attorney Corral Moguel, who is representing the ejidatarios of Holbox, explains that after years of litigation, some of them have accepted payment for their land at a price that is only 5% of the actual value of the property.

For the original report go to http://www.theyucatantimes.com/2014/06/the-holbox-situation-what-is-really-happening/

2 thoughts on “The Holbox Situation: What is really happening?”