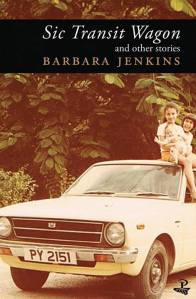 Barbara Jenkins has been longlisted for the Frank O’Connor International Short Story Award with Sic Transit Wagon. The shortlist of six will be announced at the end of the week.

For more on the prize go to http://www.frankoconnor-shortstory-award.net/site/?page_id=334

Jenkins spoke about the writing on Sic Transit Wagon to Shivanee Ramlochan of Caribbean Beat. Here’s an excerpt.

“The writing in Sic Transit Wagon is so remarkably well formed for a first collection, as if Barbara had been writing all her life,” says Peepal Tree Press founder (and Jenkins’s editor) Jeremy Poynting. “It’s not just that there’s a lifetime’s mature, reflective experience in the stories, but an exactness of style, an achieved personal voice that is very accomplished.”

“Ghost Story”, winner of the 2011 Small Axe Literary Competition for fiction, is one of the pieces slated to appear in Sic Transit Wagon. It tells the tale of Ghost, an itinerant Trinidadian “piper” — or redistributor of fresh produce that isn’t his in the strictest sense of the word. When Ghost’s fortunes take a tumble for the worse, the friendly neighbourhood ladies whose trees he has been “minding” find that life without their favourite fruit entrepreneur tastes more sour than they expected. Jenkins’s prose evokes a natural portrait of the immediate world that seems effortlessly done. Each story in Sic Transit Wagon feels like a familiar conversation, a destination we’ve already been to, but couldn’t map ourselves with as much clarity or grace.

Jenkins has also won the Caribbean region prize in the Commonwealth Short Story Competition consecutively in 2010 and 2011, as well as the 2010 New Writing Prize for Life Writing from Wasafiri, a magazine based in London.

You can read the entire article at http://caribbean-beat.com/issue-120/writing-lifetime-barbara-jenkins#axzz34ChIVSCC