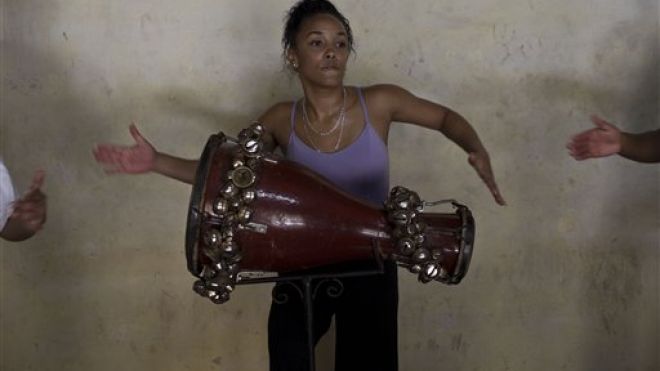 The article “Cuban Female Drummers Breaking Out of the Mold in a Man’s World,” stresses that Cuba is seeing a boom in women percussionists as “the generation that first started playing in the 1990s comes into its own and inspires younger talent to follow.” Read excerpts here and follow the link to the full article below:

It wasn’t that long ago that Cuba’s rich percussion scene was essentially a boys’ club, dominated by men due to macho attitudes and religious tradition. Perceived as too weak for the physical demands of drumming, and unsuitable for an instrument considered a means of communicating with the gods, women were shut out of rehearsal spaces and barred from using “bata” drums belonging to the National Folkloric Ensemble. Instructors were warned that if they taught women, it could cost them a place in a traveling tour or a major performance. [. . .] Today, experts say, the island is seeing a boom in women percussionists as the generation that first started playing in the 1990s comes into its own and inspires younger talent to follow.

[. . .] Under Afro-Cuban beliefs, the two-sided bata (pronounced ba-TAH’) are sacred, used for connecting with Santeria spirits. Tradition dictates the drums be made only from the hides of male goats. Players must undergo a lengthy consecration ritual. And, above all, the sacred bata are to be played only by men. [Eva Despaigne, the 60-year-old director of Obini Bata, Cuba’s first all-female bata orchestra] however, was determined to fight convention. As an Afro-Cuban folkloric dancer, Despaigne saw the drum as a means to experience her art at a deeper level. [. . .] Despaigne patiently worked to persuade male batistas that her desire to play was not for religion, but for art. Little by little, she began to win them over.

After breaking off from the National Folkloric Ensemble in 1994, Obini Bata spent years on the margins of acceptance. With time, however, more women took up the hourglass-shaped drum and also became percussionists in other genres such as jazz and big band.

“From the 1990s to today, the girls have begun studying percussion (more) and the number of those who have graduated is great,” said Mercedes Lay, a percussionist and musicologist who works with the governmental Center for Research of Cuban Music.

[. . .] Female batistas are still banned by traditional Afro-Cuban priests, who see their drumming as sacrilegious. But women drummers’ growing acceptance is evidenced by their inclusion in rumba and rock groups, as teachers and in bands touring overseas.

Acclaimed players include Yissy Garcia, a jazz percussionist who comes from an accomplished musical family, and Naile Sosa, an energetic rock ‘n’ roll drummer who has collaborated with local stars such as David Blanco.

Yaimi Karell, a 33-year-old who plays with the popular island Afro-pop fusion group “Sintesis” and also teaches percussion, said women drummers have proven themselves and gained the respect of their male peers. [. . .]

[Many thanks to Luis Figueroa-Martínez for bringing this item to our attention.]