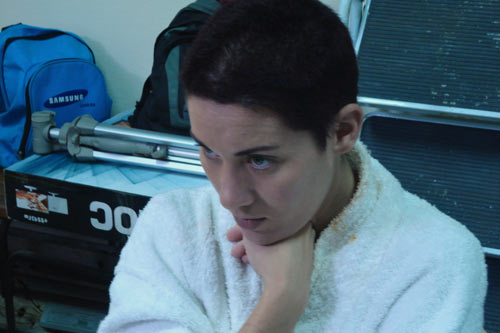 The countdown has begun to the premiere of Omega 3, Eduardo del Llano’s latest film and the first science fiction feature made in Cuba.  Del Llano is a filmmaker who tries hard to avoid repeating himself. Thus, in the upcoming film, which is still in post-production, he avoids using pre-established formulas or structures, though he takes advantage of his experience as a science fiction writer to offer a complex and diverse film that deals with intolerance in human relationships.

“Omega 3 is a story of mine. I’m best known for writing humorous pieces, but I’m very fond of science fiction and have a science fiction novel published by Letras Cubanas called Obstáculo and several stories. I really like this genre and take in a lot, both films and literature. Since my education is in the humanities – I studied art history and am not a scientist – I can write this sort of science fiction that deals with interpersonal relationships among the characters and conflicts that may arise; my stories don’t emphasize technology,” the filmmaker said in an exclusive interview with Cubanow.

As in other science fiction stories I’ve written, here there’s a sort of travel to the future that could come true in the present, which I hyperbolize in that time. It will be a post-apocalyptic, catastrophic film. Generally, these are films take place after a world war or a natural catastrophe, with their consequences. We see a planet that’s basically devastated, with cities in ruins, reduced to rubble.

When you say devastation and cities in ruins, will there be any point of contact with Cuban reality and the progressive deterioration of the capital, Havana?

Contact points always emerge, even without my proposing underlying meanings. My work will always be penetrating. For example Casting, my previous work, is a medium-length (41 minutes) film about how we artists and, in general, all Cubans, sacrifice certain ethnical principles more than should be, to obtain what we want. Already in Vinci, even though many people insist on looking for the ‘cat’s fifth leg,’ direct references to current Cuban reality, it’s not that it doesn’t refer to it, but it wasn’t just about contemporary Cuba, rather the world in general. The same thing happens in this film. There might be as many interpretations as viewers; but there’s something more, it has to do with intolerance. Everything occurs in a specific period, in the late 21st century. The name of the country is never mentioned, and we tried to insure that neither the costuming nor the vegetation seen made any reference at all to any specific country. [. . .]

See a more extensive article (in Spanish) and photos, such as the one above (of Dailenys Fuentes) at http://www.cubacine.cult.cu/noticias/%C2%BB-de-visita-en-el-set-de-omega-3-nuevo-proyecto-de-eduardo-del-llano]

See the director’s blog at http://eduardodelllano.wordpress.com/