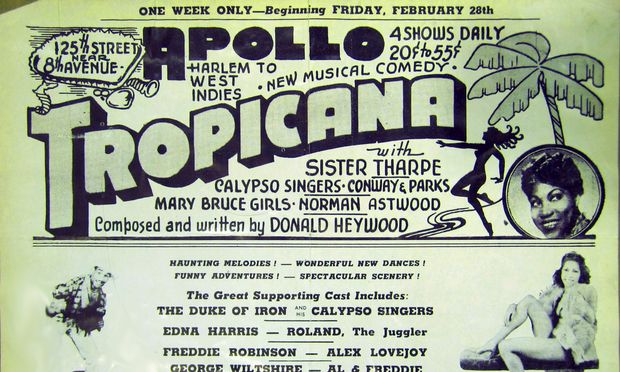 Here is an interested piece on the history of calypso in the U.S. According to author Michael Eldridge, WNYC pioneered calypso broadcasts in the U.S. Eldridge offers fascinating information about this vintage calypso music. As he says, “Lots of people have heard Day-O!, which kicked off the Calypso Craze of 1957. Fewer know that calypso had been in vogue in the U.S. twice before: once in the late 1930s to early ‘40s, and again at the end of World War II. New York City, seat of the entertainment industry and home to a large West Indian-American population, was the epicenter of all three booms.” I recommend the full article to learn more about the pioneers of calypso in the U.S. such as radio host and (later) ethnomusicologist Henrietta Yurchenko and the singer called “The Duke of Iron” and his Trinidad Calypso Troubadors.

Here are excerpts with a link to the original article below:

When 23-year-old Henrietta Yurchenco wangled a job at WNYC in 1939, she “didn’t know a microphone from a monkey wrench” (as she recalled decades later). [. . .] The young leftist’s bohemian social circle put her “in the center of all that was new and exciting in New York’s musical scene,” and although Yurchenco was a classically trained pianist, she had long maintained an open-eared interest in “ethnic” music. Soon, she was featuring live performances of Flamenco guitar, African marimba, Chinese pipa, Indian sitar, and Brazilian folksong on her aptly named Adventures in Music. [. . .] Yurchenco took a broad view of both “American” and “folk.”  That’s why Yurchenco put Trinidadian calypso on the air —years before Seeger and the “People’s Songs” crew made a point of including it in their Hootenannies and Midnight Specials.

As it happens, calypso was already in the air in late 1930s New York: since 1934, top calypsonians from Trinidad had made annual visits to the city, recording for Decca and gigging in clubs. The initial contingent appeared on Rudy Vallee’s “Fleischmann’s Hour” on NBC (their accompanying bandleader, Trinidadian expatriate Gerald Clark, subsequently got his own weekly radio show on WHN), while the 1937 cohort had patrons at Le Ruban Bleu standing on their chairs. By 1938, demand for calypso records—which for the first time were being sought in great numbers outside of the West Indies, Harlem, and San Juan Hill—sparked what Time magazine hailed as a “Calypso Boom”; soon Newsweek, Life, Billboard, and Modern Music (the League of Composers’ quarterly journal) noted the trend, too. In 1939 Decca issued an album of American-themed calypsos in its popular, rather than its “race” or export, series; its author, the Trinidadian Wilmoth Houdini, who’d been living and recording in New York for more than a decade, was profiled in the New Yorker and asked to sing at the opening of the World’s Fair. Meanwhile Max Gordon, proprietor of the up trending Village Vanguard, booked the “Calypso Recorders of Trinidad” in September 1939 and found his business had “more than doubled” at the end of ten weeks; not surprisingly, he continued to sign calypso acts regularly through the ‘40s and ‘50s.

The lead vocalist for the original Vanguard engagement was a lanky Trinidadian émigré who performed as “The Duke of Iron” (real name Cecil Anderson). At the time, Anderson’s resumé wasn’t long: he had recorded a handful of sides for Decca—pop tunes and novelty songs, oddly—with Gregory Felix’s “Krazy Kats” and four calypsos for the upstart budget label Varsity. Taking a chance, Yurchenco tapped Anderson to appear on WNYC, and his career took a decided jump.

Between April 13 and August 27, 1940, Yurchenco devoted five or more episodes of Adventures in Music to calypso, and at least two of them featured the Duke of Iron and his Trinidad Calypso Troubadors. By October she had given the Duke his own show, Calypso, which aired Saturdays at 1:30 (it later moved to 5:45); it’s likely that members of Gerald Clark’s Caribbean Serenaders served as the program’s house band. Surviving scripts show that the Duke typically sang a mix of originals, popular favorites and carnival hits by veteran calypsonians (“Ugly Woman,” “King Edward the VIII,” “Roosevelt in Trinidad,” “Mathilda,” etc.), and older tunes sung in patois. [. . .]

Michael Eldridge is professor of English and International Studies at Humboldt State University in Arcata, California.  He has published several scholarly articles on calypso in mid-century America, with support from Fulbright and the National Endowment for the Humanities, among others.  He charts calypso’s North American travels on his blog, Working for the Yankee Dollar.

One thought on “Listening to Vintage Calypso Music”