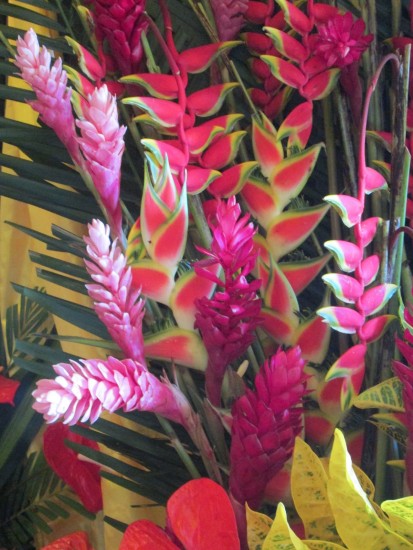 The Giraudel/Eggleston Flower Show takes places this year on May 3 to May 7, 2014, in Giraudel, Dominica, under the theme “Creativity with Flowers.”

[. . .] President of the Giraduel/Eggleston Flower Group, Stephanie Royer, explained that this year’s show will officially be opened with a ribbon cutting ceremony on May 3rd and a special address from Parliamentary representative of the constituency, Ambrose George. [. . .] A mass at the Giraudel Catholic chapel will open day two of the show. The show will open at 11:00 am on that day.

According to Royer, this year will be the 41st year since the show started, although there was a lapse of nine years. “This year is 41 years since the first show was held,” she stated “We had a lapse for nine years … last year was the first time in nine years. Previously we would have the show moving from place to place from school to church to community hall to playing field and that would be time and labor intensive.”

Royer pointed out that a specific area has now been set up for the show. “We call it home to the flower show. The idea is to eventually transform here into a botanical center where members of the community can come and relax and it will also be open to visitors,” she stated. She added that the show was not financially successful last year however the committee remains hopeful that this year will be better.

[. . .] A special award will be given to 10-year-old student of the Giraudel Primary school, Tarik Richards at the opening ceremony for coming up with the theme for this year’s show.