Today marks the 49th anniversary of the start of the April 1965 Revolution [La Guerra de Abril], one of the most relevant events in Dominican Republic’s history. It is the anniversary of the 1965 military and popular uprising against the “Triumvirate,” the junta that ruled the country after the coup d’état against center-left President Juan Bosch.  Bosch was the first democratically elected president after the 31-year bloody dictatorial regime of Rafael Leónidas Trujillo, who had been assassinated in 1961. [In the photo above, Francisco Alberto Caamaño Deño, leading figure of the revolution, is in the second row, at left.] Here are excerpts from Dominican Today.

The revolution took on the dimensions of a civil war when conservative military forces fought against the Constitutionalists on April 25. The U.S. intervened on April 28. Here are excerpts from Dominican Today. 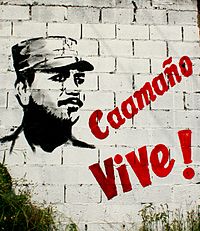 [. . .] The Caamaño Foundation, named after the revolt’s hero, will commemorate the date with several activities in the capital.

The Foundation laid a wreath on the Tomb of the Heroes and Martyrs of the Homeland War at 9am, in the cemetery on Independencia Av. It also headed an activity at 10am in front of the Copello building, where Col. Francisco Alberto Caamaño Deño, Constitutional President of the Republic-in-Arms, announced the start of the Revolution. There’ll also be a tribute to Caamaño at the 12 noon at the National Forensic Science Institute, on 27 de Febrero, corner Alma Mater avenues.

A mass at Las Mercedes Church at 3pm, for those fallen during the battles in the war which lasted less than two months, and which prompt then U.S. president Lyndon Johnson to send an occupation force.

For more information on the April Revolution, see http://lo-de-alla.org/2011/04/dominican-republic-us-intervention-then-and-now/ and http://www.history.com/this-day-in-history/us-troops-land-in-the-dominican-republic