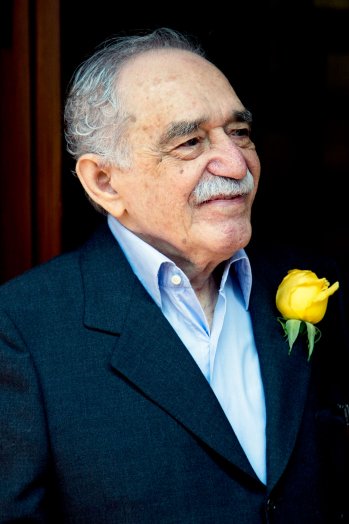 Nick Caistor (The Guardian) wrote a beautiful obituary for recently deceased literary giant Gabriel García Márquez. There is only space here for a few excerpts; we highly recommend reading the full article (in the link below):

Few writers have produced novels that are acknowledged as masterpieces not only in their own countries but all around the world. Fewer still can be said to have written books that have changed the whole course of literature in their language. But the Colombian writer Gabriel García Márquez, who has died at the age of 87 after suffering from Alzheimer’s disease achieved just that, especially thanks to his novel One Hundred Years of Solitude.

[. . .] Born in the small town of Aracataca, close to the Caribbean coast of Colombia, García Márquez (or “Gabo” as he was often affectionately nicknamed) always identified himself with the cultural mix of Spanish, black and indigenous traditions that continue to flourish there. Although later in life he lived in Paris, Mexico and elsewhere, his books returned constantly to this torrid coastal region, where the power of nature and myth still predominate over the restraints of cold reason. This sense of identification with the Caribbean coast was strengthened by the fact that the young García Márquez was forced to leave it when he was eight, so marking out the period of his early childhood as the source of not only his most heartfelt memories, but as the wellspring for his literature.

[. . .] Journalism was to remain a passion throughout his life: time and again his fictional stories have their basis in tales he heard as a young journalist, as he explains for example in the introduction to the 1994 novel Of Love and Other Demons. At the same time, whatever fantastic elements are to be found in his novels and short stories, García Márquez learned from journalism the craft of story-telling, showing himself to be an astounding judge of pace, surprise, and structure. He was also immensely interested in the cinema. In Rome in the 1950s he studied at the Experimental Film School, and while living in Mexico in the 1960s wrote several film scripts. He also dabbled in television soap operas, arguing that this was the way to reach the broadest possible audience and satisfy their need for narrative. In the early 1980s he helped found an International Film School near the Cuban capital of Havana. In 1994, he used some of the huge royalties his works had brought him to set up a school of journalism back on the Colombian Caribbean coast, at Cartagena de Indias.

[. . .] His fourth novel, One Hundred Years of Solitude, first published not in Colombia but in Argentina, was to change all that. [. . .] The novel has not only proved immediately accessible to readers everywhere, but has influenced writers of many nationalities, from Isabel Allende to Salman Rushdie. Although the novel was not the first example of magical realism produced in Latin America, it helped launch what became known as the boom in Latin American literature, which helped many young and talented writers find a new international audience for their often startlingly original work.

[. . .] García Márquez professed himself amazed at the success One Hundred Years of Solitude enjoyed, and declared that he considered his masterly study of Latin American tyranny in Autumn of the Patriarch (1975) to be a more complete work of art. Almost as powerful were the classical simplicity of Chronicle of a Death Foretold (1981), the tender exploration of the impossibilities of love in Love in the Time of Cholera (1985), or the study of the collapse of utopian dreams in The General in His Labyrinth (1994).

[. . .] García Márquez was also adamant that the writer had a public duty to speak out on political issues. His own views were strongly leftwing, opposed to what he saw as imperialism, particularly with regard to the domination of Latin America by the US. This distrust was reciprocated, and for many years, despite being one of the best-known writers among the reading public, he was denied access to the United States.

[. . .] García Márquez’s intense enjoyment of life shines through all his work, sometimes even seeming to be at variance with what is apparently its underlying message. As the title of his greatest novel tells us, its theme is the solitude and abandonment of Macondo, and yet the sheer appetite for life revealed in the characters and the storytelling itself speak instead of a huge wonder and enjoyment of existence. The millions of readers of García Márquez’s books throughout the world appreciated above all that he wrote about immediately accessible themes such as love, friendship and death in a way that was new and yet plainly part of the great novel tradition. To many Latin Americans, García Márquez’s work had the added importance of showing them that even if an author is born far from the centres of political and cultural power the sheer force of imagination can succeed in creating a world that will be magically recognised everywhere. [. . .]