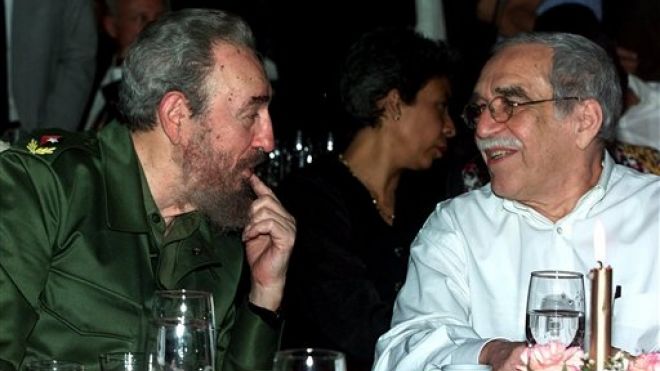 All of Latin America is mourning the death of Gabriel García Márquez. A flurry of articles on his life and death has just begun to appear (I can barely keep up). A few have focused on the writer’s political life, many of them writing about the eons-long friendship between the Colombian author and Fidel Castro, for example. This is not surprising in view of Cuba’s particular debt to García Márquez, who, in the early 1980s helped found an International Film School near the Cuban capital of Havana [see previous post Gabriel García Márquez Obituary].

One such article, “Gabriel Garcia Marquez and Fidel Castro: A controversial friendship,” focuses on reasons for their friendship, a mutual respect and admiration for one another’s intellects and life-long projects. The India Times writes:

Colombian novelist Gabriel Garcia Marquez met Fidel Castro after the Cuban leader grabbed power in the 1959 revolution — the beginning of a decades-long and controversial friendship. Garcia Marquez, who died in Mexico City on Thursday aged 87, had arrived in the Caribbean island as a journalist to cover Castro’s band of bearded guerrillas who ousted right-wing dictator Fulgencio Batista in January 1959.  They quickly became friends, bringing together two of Latin America’s most prominent figures of the 20th century.

Not surprisingly, Fox News centers on the fact that the Nobel Prize-winning author had/has many detractors who disliked his friendship with Castro and highlights the fact that the United States, did not look kindly upon “his rants against ‘U.S. imperialism,’ and denied the Colombian writer a visa to travel to here for more than three decades.” Here are excerpts of Elizabeth Llorente’s “Amid Praise for Gabriel Garcia Marquez, Criticism Over His Bond With Fidel Castro”:

Detractors posted quotes by García Márquez, a self-styled socialist, expressing admiration for Castro, and affection for the Communist leader he depicted as a gentle soul. [. . .]

The relationship grew so close that the writer even had a house in Cuba, and would send Castro drafts of his work. In 2003, Castro wrote about García Márquez: “I have always received from Gabo pages that he is still working on, with that generous and simple gesture with which he always sent me – and other people whom he appreciates very much – the preliminary drafts of his books, as proof of our old and affectionate friendship.” Castro went on to describe the writer as “a man of cosmic talent with the generosity of a child, a man for tomorrow, and we thank him for having lived that life in order to tell it.”

His friendship with Castro even was derided by fellow writer, Peruvian Mario Vargas Llosa, who had a falling out with García Márquez over various issues [and punched him in the face, as rumor has it, due to some impropriety with Vargas Llosa’s wife] termed him “a courtesan of Fidel Castro” who turned a blind eye to abuses the Cuban leader committed against dissidents.

One thought on “Gabriel García Márquez and Fidel Castro: A controversial friendship ”