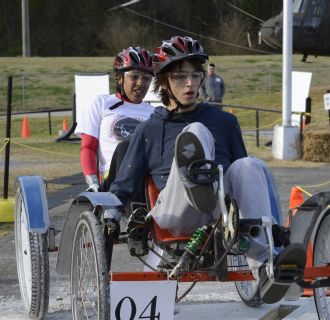 University of Puerto Rico students took top honors in the college division and an island high school team landed in a contest that drew dozens of teams of students from around the world. The event evolved from NASA’s Great Moonbuggy Race, where island teams proved to be perennial powerhouses over the years.

A team from UPR Humacao won the top prize in the college division. Student t racers from the Vocational High School Teodoro Aguilar Mora in Yabucoa placed second in the high school division behind the Academy of Arts, Careers and Technology in Reno, Nevada. They raced to victory against 70 high school, college and university teams from 19 states, Puerto Rico, Germany, India, Mexico and Russia. All told, more than 500 students — drivers, engineers and mechanics, plus team advisers and cheering sections — took part in the competition.

[. . .] The UPR Humacao Team 2 finished in 4 minutes, 9 seconds. The team from the Academy of Arts, Careers and Technology finished the half-mile course in 3 minutes, 37 seconds. In addition to the winning trophy, first-place teams received a cash prize of $3,000, courtesy of The Boeing Co., of Huntsville.

[. . .] Puerto Rico teams also took a home other accolades including a sweep of the featherweight award (for the lightest rover on the track): Academia Menonita Summit Hills in San Juan in the high school division; and UPR Humacao Team 2 in the college division.

The team from the UPR Mayaguez grabbed the best report award (technical documentation of the equipment and procedures used in design, build, test and the results obtained).

[. . .] Those NASA engineers are paying attention: Students’ most innovative vehicle and hardware designs could help inform NASA’s own development of rovers and other space transportation systems for future exploration missions across the solar system.

[. . .] The top-place win by UPR Humacao and the additional awards build on the Puerto Rico’s stellar track record at the Great Moonbuggy Race. Puerto Rico made a clean sweep at NASA’s final Great Moonbuggy Race last year, taking top honors in both the high school and college divisions. Teodoro Aguilar Mora Vocational High School of Yabucoa won first place in the high school división, while racers from the UPR Humacao claimed the college-division trophy in 2013.

In 2012, Humacao teams led the way to take first and second place in the high school division. The UPR Humacao team placed second in the college division in 2012, falling just shy of defending the titles it had won in both 2010 and 2011.

Puerto Rican teams landed the three top honors in the 2011 edition. Teams representing Teodoro Aguilar Mora Vocational High School snared the top two berths in the high school division; and, for the second straight year, UPR Humacao, the only school to enter a moonbuggy in every race since it was founded in 1994, held off all comers to win the college division.