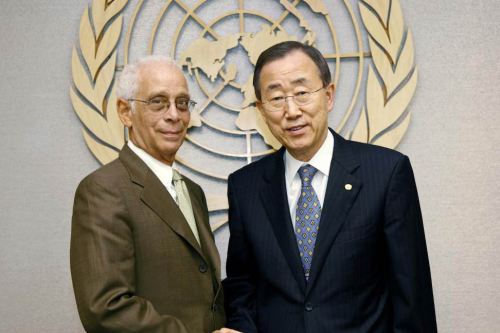 The Secretary-General of the United Nations, Ban Ki-moon, is deeply saddened by the death of Norman Girvan of Jamaica, who had been his Personal Representative on the Border Controversy between Guyana and Venezuela since April 2010.

He extends his heartfelt condolences to his family and to the Governments and people of the Caribbean region.

Girvan was one of the most distinguished Caribbean scholars of his time. He was particularly devoted to the promotion of regional integration in the Caribbean and Latin America. This commitment earned him the respect and admiration of the entire region.

The Secretary-General is grateful for Girvan’s contribution to the United Nations good offices process between Guyana and Venezuela. The progress achieved during his tenure was acknowledged by the Heads of State of Guyana and Venezuela and is part of his impressive legacy.