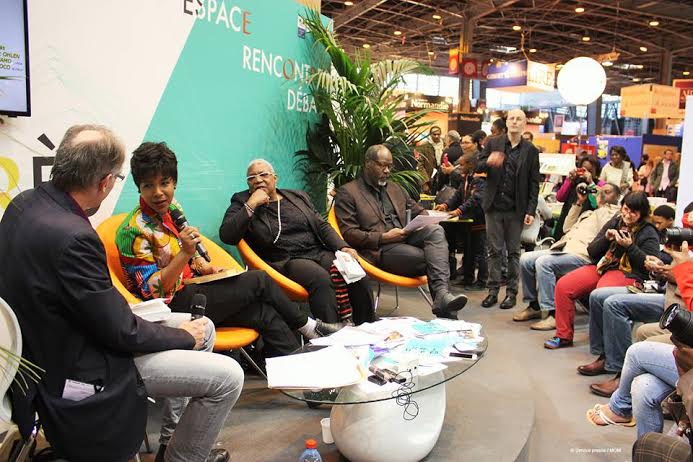 At the Paris Book Fair 2014, which was held from March 21 to 24, the French Ministry for the Overseas Departments organized a series of meetings, debates, book signings and readings under the joint banner of ‘The Overseas Departments – Near or Far.’ On the 22nd, the ‘Imaged Words’ Roundtable allowed Euzhan Palcy, director of the film Rue Cases-Nègres [Sugar Cane Alley] (1983), to passionately recall meeting with Joseph Zobel, the author of the novel La Rue Cases-Nègres (1950) [on which her film is based].

“My mother made ​​me read the book to calm me down. I loved it and it has not left me alone since. I always seem to rediscover [in it] the environment that was mine” – this is how Euzhan Palcy (1958) explains her encounter with the work of Joseph Zobel that has forever marked her life. Accompanied by comedians Firmine Richard and Jean-Michel Martial, who read several strong excerpts from the novel, she explained the choices she had to make to adapt it to the screen. “The novel has its identity, and the film has its own without betraying the author. On screen one must make choices; the novel is so rich, and I could not keep all the scenes. That is why I chose to represent only Maman Tine, the grandmother of the hero, José, and not Délia, his mother.”

Another example has become famous in the minds of all readers and watchers: in the novel, José lives in Fort-de-France with Délia. She receives a telegram that invites her to visit Maman Tine who is seriously ill. She does not have the money to go accompanied by José. He understands that the length of time that his mother stays away implies that Maman Tine has passed away. For the screen adaptation, Euzhan Palcy had to find a trick for Maman Tine to return to Sugar Cane Alley and for José to be present at her death. The end of the film, which is very moving, is therefore totally different from the book.

But these necessary choices did not alter the strength of Zobel’s intention and allowed for a faithful reproduction of the themes that he touched upon. “Zobel [1915-2006] was born in a small village, he was a child of the soil who could speak from the heart. He was a poet, a musician, a painter who painted with words. In his descriptions, he was a sculptor. He was so accurate that it was easier to adapt [to the screen]. Some scenes were already there even if the dialogues were missing. I personally took care of research to find the words, the language used at the time. Some expressions, especially swear words, were no longer used. Zobel helped me tremendously and that made the adaptation richer.”

The Martiniquan director then spoke fondly of meeting with Joseph Zobel. “When I arrived in Paris for my film studies, I researched Zobel extensively. I ended up thinking he was dead, but I phoned the [book] editor who said that he was very much alive and lived in France. I then wrote him a letter in which I told him that since the age of 14 I had carried his book like a spider carries its egg, that I wanted to adapt it into a film and would like to meet him. We then spent 5 days together, with his family, at his home in Gard. Only on the day before I left, he kindly brought forward La Rue Cases-Nègres. I spoke at length, he listened to me attentively and finally said: ‘This is the first time someone talks to me with so much passion, love and fairness about my novel. With everything you have said, I trust you completely, you have my blessing’.”

Considering that the author had left Martinique in 1946 and had always refused to return, Euzhan Palcy fought to convince him to make an appearance in the film. He finally agreed to play the priest, and “when he arrived, he cried of happiness, all of Martinique came to see him. He bought a house and took his whole family there. I am very glad that I could cause Zobel’s return to his native land.”

The original article (in French) is at http://www.e-karbe.com/livres/au-salon-du-livre-de-paris-euzhan-palcy-evoque-sa-rencontre-avec-joseph-zobel.

One thought on “Euzhan Palcy recalls meeting with Joseph Zobel”