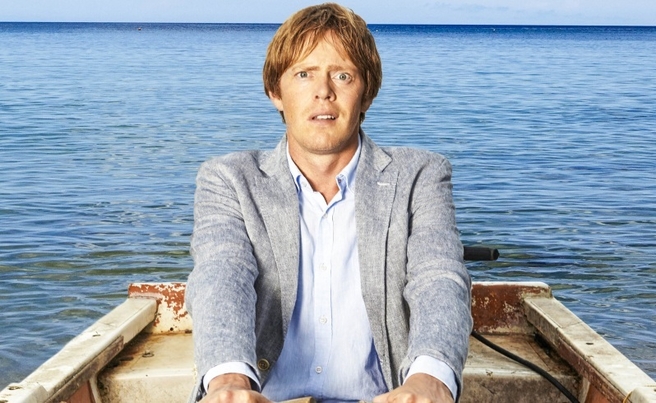 Quirky Caribbean crime series Death in Paradise has been a huge hit for the BBC, drawing audiences in the UK of up to eight million viewers an episode, Pam Brown reports for The West Australian.

At the heart of that success has been the star, Ben Miller, who plays straitlaced British Det-Insp. Richard Poole, who hates sand between his toes, refuses to bend to the island heat and abandon his wool suits and pines for the cool fogs of England and his local pub.

So there was consternation when Miller said before the shooting of the third season that he could not spend another six months away from his family filming on Guadeloupe, which in the show becomes the fictional island of Saint Marie.

When it was announced that Kris Marshall (Citizen Khan, My Family) would take Miller’s place, the fan blogs exploded in outrage.

Marshall admits he was quite scared about how audiences would react when his character, DI Humphrey Goodman, joined the show.

“There was massive negativity when it was first announced and even when the first episode came out in the UK, the response on Twitter in the first 20 minutes was so bad I was thinking ‘Oh God, OK, I won’t be working for the BBC for awhile’,” he said. “But then people started to come round.”

They came round far enough for the BBC to order a fourth season which begins filming next month, and Marshall is signed to do a fifth if required.

He says his character in Death in Paradise is still a fish out of water but the fish is different.

Goodman wears linen suits and even paddles in the picture-perfect ocean in the first episode.

But he is just as socially inept as Poole and he is clumsy, he falls over his own feet and even out of a window.

What the two have in common is a talent for solving crimes and in the first episode each in his own way finds something suspicious about the fact that four of Poole’s old university friends turn up on Saint Marie for a reunion and invite him along.

Marshall says he did not want to change the series. It was important that it was he who assimilated into the show rather than have the show change for him.

And he did get some advice from Miller about how to tackle the big denouement scenes at the end of each episode when the killer is revealed.

“The first piece of advice was pretty obvious, he told me to learn my lines for the big denouements backwards as they are 10-11 pages long and it is just you talking and in that heat if you start getting confused you are setting yourself up for a massive fall.

“The other piece of advice was genius. He said to ensure that you shoot everything on you in the morning when it is not so hot so that in the afternoon when they get everyone’s reaction shots you can watch them fry while you are standing there in a vest, shorts and flip-flops.

“And that is exactly what I did.”

Marshall revealed that Miller had other ways of coping with filming in a woollen suit. He had all the suits cut out underneath and he had icepacks built in.

“I did not have any of that. I had about three layers on and it is pretty warm there. It can get up to about 38C and during the rainy season it is very oppressive. It does strange things to your mind, especially when you are trying to remember five pages of police dialogue.”

Marshall’s wife and young son lived with him on Guadeloupe during the filming of the third season and will go out again for the fourth.

“I could not have done it without them,” he said. “My wife taught yoga to the cast and crew and my son went to a French creche. We went native really.”

And he is happy to reveal that one particular native of Saint Marie will continue to appear in the show – Harry the lizard, who Poole befriended when he moved into his beach hut.

“God yeah, Harry is the star of the show – and you know he’s not even real? He is a CGI lizard. He is so popular, absolutely everyone loves Harry.”

‘There was massive negativity when it was first announced and even when the first episode came out in the UK . . . I was thinking “Oh God, OK, I won’t be working for the BBC for awhile”.’

One thought on “Death in Paradise: Stifling the heat”