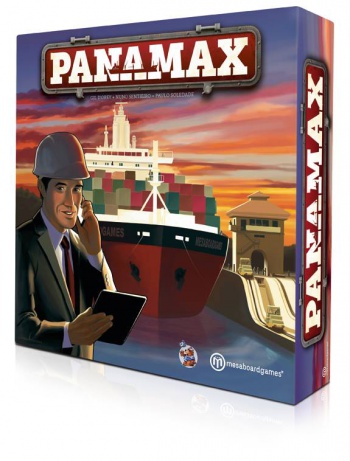 Stronghold Games and MESAboardgames have announced Panamax, a European-style board game of ship and cargo movement through the Panama Canal, CJ Miozzi reports in this article for The Escapist.

The Panama Canal was completed in 1914, and in celebration of its 100th anniversary, Stronghold Games and MESAboardgames have announcedPanamax, an economic game that sees players move ships and cargo through the canal.

Set to release in 2014, Panamax is a European-style board game in which two-to-four players negotiate shipping contracts, hire staff, invest in the stock market, and move ships through the Panama Canal by opening and closing its locks. The ship movement system involves moving both your ships and your opponents’ through the canal, and the strategy is to maximize your efficiency while minimizing the incidental benefit to your opponents. A die-based action selection system involves players removing dice from the movement or cargo loading areas to perform actions. Deciding what actions to perform at any given time is crucial to making profit and, consequently, victory.

Panamax‘s rules are said to be simple, with an interactive movement system and a volatile market for players to invest in. A typical game lasts approximately 100 minutes.

Panamax is scheduled to premiere in Essen, Germany in October at the annual Spiel game convention, but Stronghold Games may have advanced copies available to demo or purchase at Gen Con in Indianapolis, Indiana in August.

For the original report go to http://www.escapistmagazine.com/news/view/132835-Panamax-Game-Celebrates-Anniversary-of-Panama-Canal