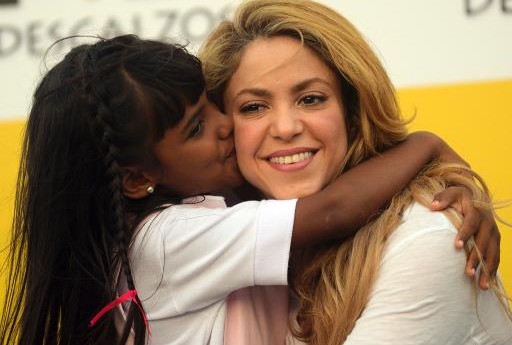 Lomas de Peye residents used to fear that a strong gust of wind from the Caribbean would be enough to knock down their school. Then Shakira came to their aid, Agence France Presse reports.

The pop superstar recently traveled to this shanty town in Cartagena, on Colombia’s northern coastline, to inaugurate a new 8,000 square meter brick school paid for through her charity foundation.

The $10 million school, built with funds from local and international donors Shakira’s own money, includes a football field and enough classrooms for 1,700 students.

“Besides being a school, it is a center for community development, where we dream that at least 5,000 people can come for informal programs, sports, art, or just a gathering space,” said Patricia Sierra, director of Shakira’s charity the Shoeless Foundation.

The new school is the sixth built by Shakira’s foundation in Colombia, a country wracked by drug violence and a lengthy civil war.

Children lined the neighborhood’s unpaved roads and stood in front of their humble wooden homes as they welcomed the singer, who arrived with her year-old son Milan in her arms.

Colombian Singer Shakira and Her son Milan attend a press conference in Cartagena on February 24, 2014

“It gives me great joy to know that in this space you will have the necessary tools to become good citizens,” Shakira told the future students.

Then, in a nod to the government officials at the event, she said: “Education is not a luxury, it’s a right that society should protect and the state has a definite obligation to protect.”

Wearing the school uniform, 14 year-old Jorge Eliecer Garrido welcoming the singer and thanked her for the new school.

“Now that she’s made it big, she has the heart of a child because she feels what we feel,” he said.

Lady Zuniga, an elderly woman deeply tanned from years working in the blasting Caribbean sun, told AFP locals worried about the children’s safety in the old school, where her grandchildren studied.

“A strong wind would hit it, and we were afraid that it would knock over the building,” Zuniga said.

Shakira has long been interested in helping young people.

“At the age of six she told her mother, ‘I know that I came into the world for a mission,'” Shakira’s father William Mebarak told AFP.

A Colombian indigenous boy who works selling candy along the streets of Medellin, Antioquia department, Colombia plays with a toy car on June 12, 2013, during the World Day Against Child Labour

“Two, three, four years went by and then she said: ‘I know what my mission is: the children,'” Mebarak said.

In 1997 Shakira began the Shoeless Foundation charity, and she has since taken a hands-on role in the group.

“She is proposing projects every day,” said Sierra.

For some residents, the new school not only represents hope for social improvement, but also an urban renewal project that will help cut down on crime.

“This neighborhood used to have a bad reputation. Very few people would dare to visit,” said Eduis Coneo Vergara, who lives in front of the new school.

“The access routes have been improved. There is now an increase in people who come here because they see that it’s easier to come up and is a lot safer,” Vergara said.