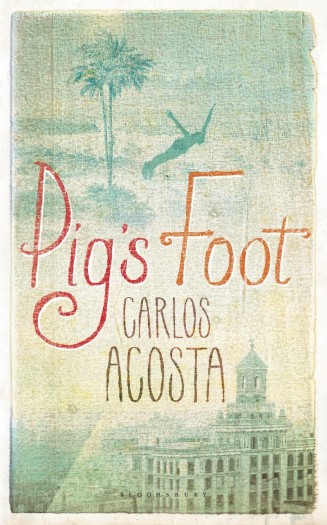 In “Pig’s Foot: A Ballet Superstar Writes a Novel,” poet, playwright, and translator Félix Lizárraga gives his opinion on Cuban-born international ballet powerhouse Carlos Acosta’s first novel Pig’s Foot [Pata de Puerco]. It’s a pity that we can only include a few excerpts of this evocative piece; but you can access the complete review in the link below. [Also see previous post Carlos Acosta: Ballet dancer on debut novel “Pig’s Foot”.]

Back in the 1990s, as a member of a small community theatre troupe called Teatro de los Elementos, I spent four or five unforgettable weeks in a hamlet lost in the mountains of the Sierra Maestra. There, where the barracks for the field hands of a sugarcane plantation had once stood, those field hands, mostly Haitian immigrants, had settled and founded their tiny village, where they eked out a living on the very edge of nowhere.

[. . .] In spite of the modesty of the accommodations and the scarcity of the simplest resources, the people of Barrancas turned out to be wonderfully hospitable. I learned some creole there (mostly forgotten now), and a few rara songs of which I still retain bits and pieces. [. . .] In the brief time we spent there, we talked to a lot of people (especially the older, Haitian-born generation) and listened to their stories. In the end, we managed to put together a production rescuing the Haitian legend of Mackandal and showcasing the considerable talents for dance and music of the people of Barrancas. I felt, however, that the story of Barrancas itself, as well as those of its fascinating, big-hearted inhabitants, remained untold.

I’m bringing up these rather old, rather personal memories only because they were recently rekindled by a book. Barrancas was (and probably still is) a place not unlike Pata de Puerco, the fictional village that gives its name to Pig’s Foot (Bloomsbury, London, 2013).

[. . .] Pig’s Foot follows the saga of a Cuban family in a relatively (and apparently) straightforward way, from the late 1800s until the 1990s, as told by a sulky, hardboiled narrator who goes by the improbable name of Oscar Mandinga. This in itself makes it unique, since I cannot think of a single Cuban novel before Acosta’s that has ever attempted such a multigenerational account. But the real kicker is that the family whose lives are chronicled here is a black family—as evidenced by their last name, which comes from the Mandingo or Mandinka people.

Since the early 1800s, Cuban literature, particularly the novel, has been no stranger to the lives and issues of people of African descent. Unfortunately, most attempts have ranked from the merely well-intentioned (like Gertrudis Gómez de Avellaneda’s Sab and Antonio Zambrana’s El negro Francisco) to the frankly clueless. Probably the only exceptions are Cirilo Villaverde’s Cecilia Valdés (somewhat lifeless as a novel, but priceless as a sociological study of 19th-century Cuba) and Alejo Carpentier’s magnificent El reino de este mundo (The Kingdom of This World), about the Haitian Revolution. Almost all of these books (the good, the bad, and the risible) have been written by people of white race.

I would not like to reduce Pig’s Foot to the politics of black people—there is a lot more to it than that—but that is clearly one of its main themes from the beginning, where Oscar the narrator claims to be imprisoned, in 1995 Cuba, by Commissioner Clemente, the Grand Wizard of the Cuban branch of the Ku Klux Klan.

[. . .] The story of the Mandinga family proper begins in slavery, with the birth of two male slaves, one of them a pygmy from the fictional tribe of the Korticos (cortico in Spanish means “shorty”) who inherits from the father he never met an ancient amulet: a leather necklace strung with a shriveled pig’s foot. Both men go on to fight in the two Cuban Independence Wars and marry two sisters. After independence, the founders of Pata de Puerco (named after the amulet) return to settle among the ruins of the plantation where they had been slaves. And there they remain, on the margins of history. The only person from Pata de Puerco who is able to leave a mark on the outside world is Melecio, a whiz kid who becomes a world-famous architect. He singlehandedly creates the Art Nouveau style and designs, among other monumental buildings, the Bacardí tower in Havana—in the “fantastical alternate version of Cuba” created by Acosta, of course. [. . .]

In telling the story of this humble black family, Acosta achieves a difficult feat. Except for the wars against Spain, they remain mostly marginalized from history; even then, as the Kortico ex-slave points out bitterly, they are just instruments of the white men in charge. Yet Acosta manages to infuse their existence with not only drama (there are several poignant love stories woven along the book), but an epic grandeur, in a stark contrast to the prosaic world of 1995, where, as Oscar remarks, “people get married just for the extra rations of beer and cake, just to throw a party.” The grandiosity of this bygone era is aided by the fact that their chronology, like that of myth and epic, remains always a little hazy, which makes us suspect from the beginning that Oscar may be a somewhat unreliable narrator.

The novel unfolds like a set of Chinese boxes, each throwing a new light into what happened before. Come its last third, however, it takes a plunge into the realm of the mythical (where we learn the origin of the pig’s foot talisman) and later into the purely Freudian, and these two sudden turns of the screw do not work as well as the rest. Nevertheless, it must be said that the pervading theme of schizophrenia (the book is dedicated to Acosta’s sister Berta and his aunt Lucía, who both suffered from it) ends up acquiring interesting social and metaphysical undertones. Some critics have compared Pig’s Foot with One Hundred Years of Solitude; without going into detail (for fear of risking spoilers), I must say that the dichotomy between the richly epic world of Pata de Puerco and the wan reality of 1995—a dichotomy that at a certain point becomes a fork in the road—reminds me much more of Don Quixote.

Racial, political, literary, and metaphysical considerations aside, Carlos Acosta’s novel has a virtue that trips all others in the end: it is a good, gripping, satisfying read. I look forward to his next book as much as I look forward to any of his other many, variegated projects. (It also makes me wonder about that little metal cross I left behind in Barrancas, all those years ago. Where is it now? Perhaps it may have joined the pig’s foot?) [. . .]