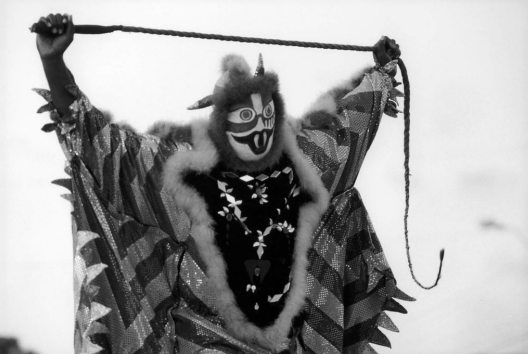 This photographic profile of Pablo Delano and his marvelous photos of the Trinidadian carnival by Andrew Boryga appeared in The New York Times. Do follow the link below to access the accompanying gallery of gorgeous black and white photos.

As a photographer who teaches at Trinity College, perhaps Pablo Delano was fated to go to Trinidad.

Mr. Delano attended his first Carnival in 1997 at the behest of a colleague. At the time, Trinidad was simply an island some 600 miles across the Caribbean from his native Puerto Rico.

But once there, Mr. Delano was charmed by the cultural fusion he witnessed: African, Indian, French and Chinese traditions, even an echo of Puerto Rico’s pulsing bomba. He was especially impressed by Trinidadians’ immense pride in their hard-fought independence after years of colonization. And at the heart of that pride — and national identity — was an annual celebration that has inspired others abroad.

“Carnival is a very serious enterprise,” said Mr. Delano, 59, who returned to Trinidad for subsequent visits between 1997 and 2006, culminating in the book “In Trinidad.” Most striking about his work is that unlike countless images of Carnival from Rio de Janeiro to New Orleans, his are rendered in black-and-white, a drastic departure from the hot colors and light comprising the typical Caribbean palette.

“Stripping away the sensuality and decorativeness of color is a way to offer a counterpoint to stereotypical notions of the Caribbean as a so-called riot of color or vacation paradise of the sun, sea and sand,” said Mr. Delano, the chairman of the fine arts department at Trinity, which is in Hartford. “It is a way of cutting to the chase, of reducing things to their essence.”

His photographs of Mas, for instance, depict traditional Trinidadian characters such as the Jab Jab, a regally cloaked, whip-armed devil. His partner in crime, the Bookman from Hell, walks the streets, masked, recording names of those he wishes to pull down to a flaming abyss. There are Moko Jumbies towering on stilts. And Dame Lorraines, busty mockeries of the wives of European plantation owners, once prevalent in Trinidad during Spanish colonial rule in the 18th century. Costumes and characters in Trinidad are planned and paid for months in advance of Carnival and give the wearer a distinctive choice.

“In some way or another, all of these traditional characters somehow reflect Trinidad’s colonial history,” Mr. Delano said. “Their history of oppression and their history of emancipation.”

Mr. Delano’s most intriguing characters are sailors astray, played by a band of men from the small town of Carapichaima, donning crisp naval outfits before descending into gutters and mud and running amok. Their lineage can be traced to the large United States naval presence in Trinidad after the Lend-Lease Act was signed by President Franklin D. Roosevelt in 1941.

Music has always been central to Carnival, where legendary Calypsonians like Lord Kitchener and Mighty Sparrow ruled the road marches like kings. In an effort to capture Carnival’s musical quality, Mr. Delano’s collection includes Calypso crooners, biscuit-tin drummer boys and steel pan bands on the backs of flatbed trucks surrounded by sound-system speakers that would burst an eardrum if one got too close.

Mr. Delano presents an intimate portrait of Carnival, straying from tourist destinations to capture the rural and generational facets of a celebration that at its heart is as much about nationhood as anything else.

“If you Google ‘Trinidad Carnival’, the pictures you come up with are not going to look anything like mine,” he said, noting the proliferation of beaches, half-naked women in sequins and headdresses, and of course, rum.

“That has become the international idea of what Carnival is supposed to look like,” he said, pausing.

“That is just so wrong.”

One thought on “Carnival’s Essence in Black-and-White: The Photographs of Pablo Delano”