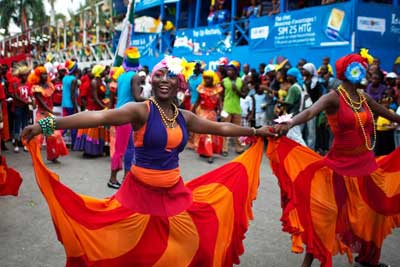 Gonaïves, Haiti, will host this year’s National Carnival on March 2-4, 2014. The city of Independence will be able to accommodate thousands of people to take part in the celebration. The theme for this year’s celebration is “Tèt Kole Pou Ayiti Pi Djanm” (Together for a stronger Haiti).

Prelude festivities officially began on Sunday, January 19, and carnival songs and meringues are already being played on radio stations and on television.

Gonaïves is a township west of Haiti, and the capital of the Artibonite Department. Estimated at about 300 000 inhabitants, it is one of the largest cities in Haiti. Because of its strategic location, its participation in the Haitian Revolution, and because it was the setting for proclamation of independence of Haiti on January 1, 1804, the city is nicknamed the “City of Independence.”

For photo above and more information, see http://www.radiotelevisioncaraibes.com/nouvelles/haiti/ayiti_pi_djanm_est_le_th_me_retenu_pour_le_carnaval_20140.html