Interviewing Calle 13, the firebrand Puerto Rican hip-hop duo, involved a little 21st-century technology. René Pérez Joglar, the rapper who calls himself Residente, was at Electric Lady Studios in Greenwich Village, where Calle 13’s new album, “Multi_Viral,” was being mixed. Residente’s stepbrother and partner in Calle 13, Eduardo Cabra Martínez, the producer and musician who calls himself Visitante, was on a tablet screen in a Skype window, speaking from his studio, Música Satánica, in San Juan.

It was a fittingly digitized, border-crossing interaction for a group that’s networked every which way: technologically, culturally, musically, socially, politically. “I think you should use every tool you have when you make music,” Mr. Pérez said.

Calle 13 was taking a brief break from frantic last-minute work on “Multi_Viral,” which was due for digital release just 15 days later. In between, they would also be rehearsing their touring band for a free concert on Tuesday at the University of Puerto Rico, which is expected to draw tens of thousands of fans, before playing arenas across South America. “It’s stressful,” Mr. Pérez said.

A vociferous rapper onstage, Mr. Pérez is quiet in conversation, careful to double-check the bilingual nuances of his words in English. 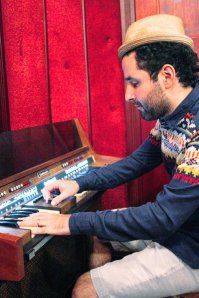 “Multi_Viral,” Calle 13’s fifth album, is the work of a duo reckoning with both its global perspective and its contentious artistic impulses, determined to maintain a rebellious spirit even as maturity looms. Mr. Pérez described his new lyrics as “more existential” than previous Calle 13 efforts.

“Suddenly I’ve started to be more aware, or worried, about living and dying,” Mr. Pérez, 36, said. “I thought, maybe I can do something bigger than politics.” He mentioned that he and his wife, the Argentine actress Soledad Fandiño, are expecting their first child in August.

From its debut album in 2005, Calle 13 has spurned genres. It dabbled in the Puerto Rican hip-hop called reggaeton but refused to be bound by it. Since then the duo has constantly expanded its music, drawing on the folkloric, the electronic and the orchestral, mixing from a world of sources — discovered in the course of their ever-expanding tour circuit and lately, Mr. Cabra said, on YouTube.

Calle 13 has won 19 Latin Grammys, more than any other act, and it has rallied international audiences with songs that hold messages of solidarity, sympathy for the hard-working poor and demands for freedom and individuality, like the Andean-flavored “Latinoaméricano.” Calle 13 keeps its distance from party politics, but not from hot-button issues: Mr. Pérez strongly supports Puerto Rican independence, regularly describing the island as a colony of the United States.

“I think every musician has a responsibility when they are making music,” Mr. Pérez said. “Sometimes people are hard on you because you say things. But I prefer that, rather than to be an artist that does not say anything and that’s why people like you. It’s almost like you’re invisible. There is a lot of music going on that for me is invisible.”

Yet Calle 13 has also been reviled for Residente’s occasional deeply raunchy lyrics and impetuous public statements. A song on the new album, “Adentro” (“Inside”), mocks gangsta rappers and warns against treating them as role models: “Are you dumb? Rapping about how to blow out brains?” But as the song continues, Residente goes on to confront himself. He reveals that he now regrets crudely insulting the governor of Puerto Rico during an angry speech at the 2009 MTV Premios Latinoamérica awards show.

“Adentro” also mentions a flashy Maserati that Residente bought during Calle 13’s first flush of success, an act of conspicuous consumption. For the video clip to “Adentro,” he plans to have gangsta-influenced Puerto Rican youth put their guns and gold inside the Maserati before he smashes it with a baseball bat. (The bat is coming from Willie Mays, one of Mr. Pérez’s heroes.)

“I used that car for four months, and by the end I was ashamed of myself,” Mr. Pérez said. “That car, in a way, is part of all that stuff: the guns, the gold. So I’m going to destroy it on video with all these guns inside.”

The Skype conversation wasn’t the only digital stream traveling between Manhattan and Puerto Rico; so were mixes of the album tracks for Mr. Cabra’s final touches and approval. At Electric Lady, Mr. Pérez had one more set of lyrics to finish and record in the next few days. He was still contemplating, he said, including some of the lewd thoughts that have peppered the duo’s previous albums. “I’ve always thought about writing something dark and sexual and wrong — wrong to some people, to moralists, maybe,” he said. “To provoke myself and to provoke people. That’s part of art — to provoke.”

Meanwhile, Mr. Cabra, 35, was still adding instrumental and vocal parts — sung by his sister, Ileana Cabra Joglar — to the album’s opening: an elegant chamber-pop setting, with hints of Beatles harmony, of words spoken by the renowned Uruguayan author Eduardo Galeano.

Calle 13 was determined to have the album ready for digital download when the group performs March 1 at the Ferrocarril Oeste stadium in Buenos Aires. The 25,000 concertgoers will receive digital download cards for the album, as will ticket buyers throughout the tour. It’s not an unprecedented idea; Prince gave concertgoers CDs of his 2004 album, “Musicology.” But a decade later, Calle 13 can count on its music spreading even faster online.

“They will be going out of the concert with this album,” Mr. Cabra said. “And then all of the songs will be in their computers, and definitely they are going to upload the songs to I don’t know where. So the multiviral concept is going to be real.”

Calle 13 splashed the title track of “Multi_Viral” online soon after it was recorded. It’s a denunciation of government, corporate and media propaganda and disinformation, with a hard-rock guitar riff from Tom Morello of Rage Against the Machine; guest vocals in Arabic from the Arab Israeli singer Kamilya Jubran; and a spoken-word appearance by Julian Assange, the WikiLeaks founder who has taken asylum in the Ecuadorean Embassy in London, where Mr. Pérez recorded him. (The president of Ecuador helped arrange the meeting.) Mr. Assange declares: “From Cairo to Quito a new world is forming/The power of people armed with the truth.” The video clip for “Multi_Viral” was made in a Palestinian town; it shows a young man rebuilding rifle parts into a guitar.

When Mr. Perez contacted Mr. Morello to ask him to play on the track, “he had me at Julian Assange,” Mr. Morello said by telephone from Sydney, Australia, where he was on tour with Bruce Springsteen. Mr. Morello described Calle 13 as “comrades in arms at the barricades.”

“One of the hallmarks of their career is weaving their convictions into their kick-ass music, and that’s something I’ve endeavored to do in my career as well,” he added. “The first thing is that the track has to be slamming. No one is showing up for a political lecture with beats. What pulls the bowstring taut of the politics is the art, and they have that in spades, and their enormous global popularity speaks to that.”

Multilayered agendas fill each song on the album, from the comical “Los Idiotas” (“The Idiots”) to the metaphysical “Me Vieron Cruzar” (“They Saw Me Crossing”) . One gentle song, “Ojos Color Sol” (“Sun-Colored Eyes”) is a collaboration with the introspective Cuban songwriter Silvio Rodríguez, one of Mr. Pérez’s longtime influences. “El Aguante” — which translates as “Endurance,” “Tolerance” or “Resistance” — opens with a brisk Irish-flavored flute melody. That tune got Mr. Pérez thinking about Ireland’s resistance to assimilation and led him to rap about all the historical circumstances, like wars and dictatorships, that ordinary people have weathered. “The music is talking with the lyrics all the time,” Mr. Pérez said.

“La Vida” contemplates the cycle of a human life span; its chorus is built on a Native American chant. When Calle 13 invited a Native American singer they saw on YouTube, Vernon Foster, to record in San Juan, it turned out he was in Romania. They flew him in anyway.

Mr. Cabra proudly noted one low-tech aspect of making the album. As he has been working on “Multi_Viral” in recent months, the light bulbs in the studio have been burning out one by one — “like a countdown,” he said. He had vowed not to replace any until the album was done, and the last light bulb expired shortly before the interview started. “So,” he said cheerfully, “I will play in darkness until next week.”

For the original report go to http://www.nytimes.com/2014/02/23/arts/music/calle-13-prepares-new-album-multiviral.html