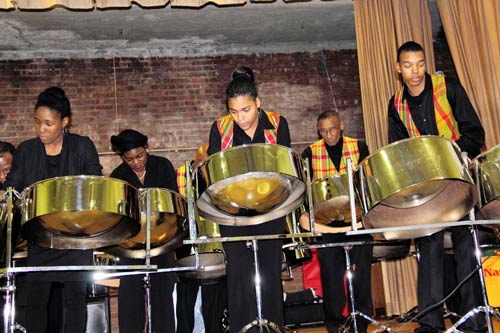 Nelson A. King writes about an event that took place yesterday (February 5, 2014) as Grenadians of all ages celebrated Grenada’s 40th anniversary of political independence in Brooklyn, where the majority of Grenadians in the tri-state area reside. Here are excerpts with a link to the full article below:

The inaugural event, a “Social Evening”, at Holy Cross Church’s auditorium in Brooklyn, launched a series of activities to commemorate this significant milestone in the Spice Isle’s history. The evening brought together Grenadians from all walks of life in Brooklyn, other New York City boroughs and other states. “The first event was one which brought attention to the strengths of the parishes of Grenada, Carriacou and Petit Martinique,” Grenada’s new United Nations Ambassador, Dr. Dennis Antoine, told Caribbean Life.

Antoine, a former Grenada ambassador to the United States and the Washington-based Organization of American States (OAS), noted that nationals “competed with pride to show which part of Grenada has contributed most” to the island’s development.

[. . .] Antoine said the “exuberant display of Grenadian symbols and colors, and the burst of eagerness in several generations of Grenadians to celebrate” were demonstrated at these events. [. . .] Grenadian nationals are celebrating the 40th anniversary under the theme, “Unifying Our People, Restoring Hope for a Brighter Tomorrow”.

Other independence activities in Brooklyn this week included a “Senior Tea Party” and a flag raising ceremony at Brooklyn Borough Hall; and the grand Independence Ball, on Sat., Feb. 8, at Grand Prospect Hall in Brooklyn, at which Prime Minister Dr. Keith Mitchell will be the featured speaker.

Grenadian and several Caribbean groups displayed their cultural attires and showcased their talent at the “Caribbean Solidarity Night” before diplomats from the respective countries.