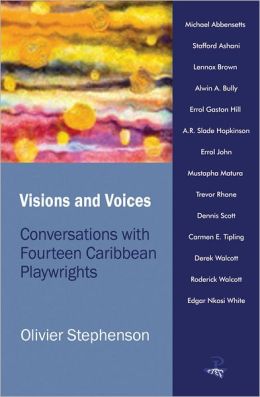 In the 1970s and 1980s Olivier Stephenson was very actively engaged in Caribbean theatre in New York. There he met a number of Caribbean playwrights, either already living there or making visits. He was looking for plays, they for theatres and performers. Out of this connection came this hugely important and unrepeatable collection of fourteen interviews with most of the founding figures of contemporary Anglophone Caribbean theatre. As the preface by Kwame Dawes indicates, the period of the interviews, from the mid 1970s into the 1980s, was a crucial one for the Caribbean theatre, as its most productive and revolutionary period, and a time when it was already taking on the variety of forms and locations that still characterise it today.

Besides talking about their own influences, experiences, goals and aesthetic visions, each playwright contributes to a collective picture of Caribbean theatre being defined by its spaces – diasporic or regional, proscenium or open air; the nature of its audiences – a heated debate about the possibilities for a commercial theatre that has the work of Trevor Rhone at its heart – and the playwright’s relationship to inherited theatre traditions and to specifically Caribbean cultural resources. Reflective, analytical, visionary, opinionated – these are lively interviews, not least because Olivier Stephenson asked each of the playwrights for their views on their peers – views sometimes given with acerbic frankness.
This collection should, of course, have been published many years ago, and the subsequent deaths of eight of the interviewees make it something of a memorial, but the interviews themselves read as freshly as when they were recorded. With extensive annotations and end notes, and insightful introductions by Kwame Dawes and Olivier Stephenson, this is an essential book for anyone interested in contemporary Caribbean theatre and its history.
Table of Contents:
Preface: Olivier Stephenson
Introduction: Kwame Dawes
Interviews: Derek Walcott, Errol Hill, Errol John, Michael Abbensetts, Trevor Rhone, Alwyn Bully, Roderick Walcott, Edgar White, Slade Hopkinson, Lennox Brown, Carmen Tipling, Dennis Scott, Stafford Ashani Harrison, Mustapha Matura
Bibliography
Index

Olivier Stephenson is a poet, a playwright, a screenwriter, and a journalist.