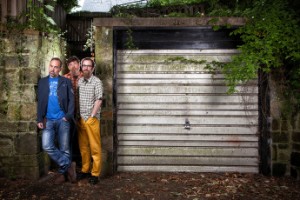 To fully vibe with The Caribbean’s latest, a primer helps, Joe Warminsky writes in this article for The Washington City Paper.

If The Caribbean were one of those bingewatchable TV series, we’d probably be at the beginning of Season 3, when the richness of the characters has been established, the narrative has a deeply intuitive flow, and the writers can assume that an audience is along for the ride. The Caribbean, however, is a weird D.C. rock band, people don’t consume music the way they use Netflix, and nobody wants unsolicited homework from a critic.

But the TV metaphor is still apt. Season 1 of The Caribbean would be everything before 2011, or roughly its first decade of existence, when it worked out a palette of askew arrangements, nerdy vocals, and electronic enhancements. You can skip that for now, as long as you give full attention to Season 2: Discontinued Perfume from 2011, which found the three core members (singer/guitarist Michael Kentoff, drummer/bassist Matthew Byars, and guitarist/keyboardist Dave Jones) pondering creativity and life while masterfully messing with indie rock’s precepts. In Season 3, the new Moon Sickness, things really get thumping, and the experience will be fuller if you come prepared.

And the thumping is literal: Discontinued Perfume was an album of uncanny enticements, but Moon Sickness is relatively direct (emphasis on the “relatively”). “Echopraxia,” which serves as a climax of sorts, has a deeply pocketed 4/4 drum pattern, an upbeat guitar riff during the verses, and a blissful coda with a conventionally pretty solo (and some mellotron, too). And it feels like a statement: The Caribbean isn’t against making a rhythmically strong crowd-pleaser, as long as the song reminds the crowd that things aren’t quite right. To that end, the lyrics seem to be from the point of view of a high-ranking Snowden-era professional eavesdropper.

Other songs center on uneasy medical situations (“Imitation Air” and “Moon Sickness,” which also has a blissed-out coda), imperfect relationships (“We’re Both Villains,” “I Haven’t Given Up Hoping”) or the dark corners of bureaucracies (“Jobsworth,” “Sixteen Kingdoms”). Yet they all circle back to an appealing, foundational beat at some point, and producer/engineer Chad Clark consistently gives the snare-drum sounds a pleasing snappiness that implies plot over mood.

Mood, of course, is always a deliberately sketchy thing for The Caribbean. Kentoff’s voice might sound more front-and-center on Moon Sickness than ever before, but it’s still largely inscrutable. He’s been compared to Ben Gibbard of Death Cab for Cutie, Ira Kaplan of Yo La Tengo, and Green Gartside of Scritti Politti, but he’s really his own animal. Those guys typically provide emotional cues amid their nasalness, while Kentoff seems to consciously avoid them. When he exhales lines such “I’m so electric, I’ll say almost anything/Hazy and eloquent, is this how the angels sing?/What I thought were bells were just alarms” (“Imitation Air”), it’s hard to say whether he’s shooting for innocence, desperation, or something else.

Then again, “something else” or “all of the above” is still the likeliest answer to the questions that arise when listening to The Caribbean. The band provides plenty of supplemental or peripheral material—including a Twitter feed that’s occasionally jovial, and the Labor podcast, which features chatty interviews with other musicians and creative types—but those things are more about expressing The Caribbean’s overall disposition, rather than explicating the songs. In the end, the music itself is built to puzzle over, and it never fails to reward a long-term commitment.

For the original report go to http://www.washingtoncitypaper.com/articles/45387/the-caribbeans-moon-sickness-reviewed-to-fully-vibe-with-the/