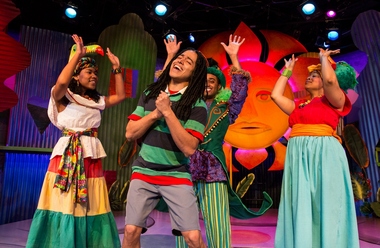 A snowy, frigid New York is about to enjoy a blast of Caribbean warmth courtesy of Jamaica and its most favorite son, Bob Marley, MArk Kennedy reports for the Associated Press.

The New Victory Theater in the heart of Times Square is putting on “Bob Marley’s Three Little Birds,” a new musical for kids that features the legendary reggae artist’s songs. It will run Feb. 7-23.

“I want Daddy to speak to children through his music,” says Cedella Marley, the first-born daughter of Bob Marley and Rita Marley and who helped create the show.

The story centers on Ziggy, a shy Jamaican child who hides from his fears – hurricanes, mongooses and evil spirits – at home, watching TV. A bird, his mom and his nagging neighbor coax him out to face his demons and enjoy life. Cedella Marley hopes it can bring “a little bit of Jamaica to kids who probably never heard of it.”

The tropically colored musical includes the title song, “Three Little Birds,” as well as “Jamming,” “Roots Rock Reggae” and “Is This Love,” among others. It’s even got the melody from “I Shot the Sheriff,” a sly note to the adults in the room.

It was inspired by the 2006 picture book written by Cedella Marley and Gerald Hausman about the Bob Marley song of the same name. Michael J. Bobbitt, the producing artistic director of Adventure Theatre MTC in Glen Echo, Md., worked with Marley on turning it into a musical.

“It was sort of fun to put it all together and figure out what songs would weave well with the story,” says Bobbitt. “I really think it showcases the gravity of his work and the breadth of his work.”

Recommended for anyone 5 or over, the show’s message – get over your fears, enjoy your life, things get better – is as all-embracing as Bob Marley’s music, which refuses in 2014 to sound out-of-date.

“There’s something in the beat that he really fine-tuned that I think is infectious. It’s a beat that can be felt in a universal way,” says Bobbitt, who helps run the D.C.-region’s longest-running children’s theater.

“But beyond that, I think that his songs and his messages and his feelings of good vibe and just enjoying life are also something that’s universal and infectious.”

The show opens Feb. 7, the day after what would have been Marley’s 69th birthday. His daughter, a mother of three boys, finds the timing bittersweet and hopes the musical will continue her father’s legacy.

“We all know the worries of the world are just getting bigger and more heavy, especially for our children. For Dad’s birthday, it’s crucial for him to remind them that, no matter what, every little thing will be all right.”

For the original report go to http://www.masslive.com/entertainment/index.ssf/2014/01/bob_marley_musical_for_kids_ja.html