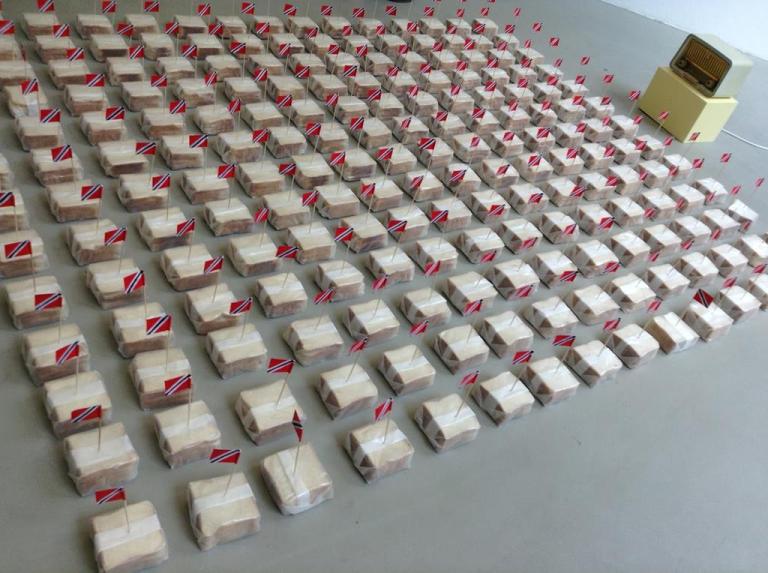 This article by Pooja Bhatia appeared in Ozy. Here’s an excerpt. For the complete article and a gallery of images follow the link below.

He dislikes the label.

Granted, most artists dislike labels and work hard to free themselves from them. From Cozier’s perspective, the label “Caribbean artist” is especially pernicious. It connotes things like palm trees and tropical birds to the people who use it, most of whom live outside the Caribbean.

From the time you start using that language, that code, then you’re kind of proceeding to render the work invisible.

Academics can be worse. In the past, some pointed to him as a post-colonial poster-boy, disposed to see in his work themes like slavery or suffering where none was. “From the time you start using that language, that code, then you’re kind of proceeding to render the work invisible,” says Cozier.

At this point, Cozier probably need not worry about his work’s visibility. The 54-year-old Trinidadian has shown all over the world, and his acclaim continues to grow. Last fall, he was one of 11 recipients of the Netherland’s prestigious Prince Claus Award.

But Cozier doesn’t worry only for himself. For years, he’s helped mentor Trinidad’s small but growing cohort of contemporary artists. In 2006, he and two comrades founded Alice Yard, a humble space where young artists come to experiment, exhibit and connect. In his studio, on the page and through a community of young artists, Cozier is redefining what the art world makes of little islands like his and former colonies the world over.

For all those serious aims, Cozier is fun: a garrulous, thoughtful storyteller who is quick to see or make a joke, or pull a wayward digression from the unabridged encyclopedia that must be in his head. You might want to talk about him, but you’ll end up learning strange facts: Television was introduced to Trinidad only after independence from Britain, in 1962. The main brands of curry powder available in Port-of-Spain are Turban and, more oddly, Chief. And movies! His talk drips with casual analyses of Heading South, the Godfather and probably everything else you’ve ever seen.

I’m trying to get rid of the rhetorical, get rid of all the familiar symbolism…

Cozier’s own work is allusive, filled with symbols and references — just not the ones his audience necessarily expects. “I’m trying to get rid of the rhetorical, get rid of all the familiar symbolism,” he told a friend and Alice Yard co-founder some years ago. Back then he was working on a series of postcard-sized drawings called Tropical Night and preoccupied with “brownness, dirty stains and scummy things.” Though it won exhibits at the Tate and the Brooklyn Museum, Tropical Night’s sepia tones and griminess caught some viewers off guard.

“A lot of the color seemed a little bit tainted because I was trying to understand these kind of locations. Even though the climate is beautiful, and the trees are wonderful, and people spend thousands of dollars to come here and spend a week lying down on the beach,” says Cozier. He wanted to evoke what happens beyond that.

Read the rest of the article and see a gallery of photos at: Christopher Cozier, Artist | Rising Stars | OZY