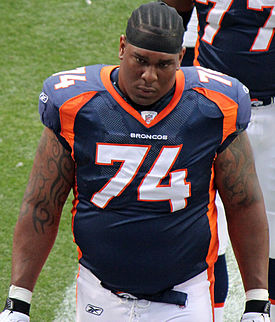 Caribbean football fans can get ready to cheer for one of their own who is anxious to get a Super Bowl ring onFebruary 2, 2014, at MetLife Stadium in New Jersey. Fans are looking out for Jamaican-born player Orlando Franklin. See excerpts:

Twenty-six-year-old Orlando Franklin, born in Kingston, Jamaica and of the Denver Broncos, is set to play in his first Super Bowl. He was part of the rest of the Denver offensive line that dominated the New England Patriots in the trenches Sunday afternoon, leaving Quarter Back Peyton Manning virtually untouched and able to complete 32-of-43 for 400 yards and two touchdowns.

The win for the Broncos and the team was especially a proud one for the 320 pound Franklin, who as a 15-year-old was once behind bars at a Toronto-area youth detention facility. The young Franklin had moved to Canada with his mother and somehow his young life got off track. “I was in a real dark place,” the Delray Beach resident told the Toronto Sun recently. “I mean, the NFL? Hey, I didn’t even know if I’d ever graduate high school, let alone think I’d ever make it to the NFL.”

His success today is due largely to his mother, Sylvia Allen. After she picked him up from that detention in Toronto and took him home, she made him write: “I, Orlando Franklin, promise my mother, Sylvia Allen, that I will never get in trouble with the police again. I promise to dedicate myself to football … Sincerely …”

From that day forward, he did and on Sunday, Jan. 18th, his mother was in the stands to see her son and his team make it to the Super Bowl. Franklin started out with the Scarborough Thunder in Toronto and soon convinced his mother to move to Florida. There he was quickly noticed by the University of Miami and played on the offensive line for the Hurricanes before being drafted 46th overall by the Broncos in 2011. And the rest as they say is now history.

Mom Sylvia, who lives in Jamaica now and still has that promissory note her son signed at age 25, will also be in New Jersey in two weeks to cheer her son as the Broncos take on the Seattle Seahawks to find out who will win Super Bowl XLVIII. Franklin, who has started 47 games in his first three NFL seasons, hopes it will be the Broncos and he can finally get that shiny and coveted ring.