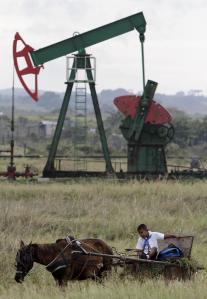 Juan A. Tamayo (Miami Herald) writes that Cuba has announced new plans to drill for oil from land, while experts say its prospects for deep-water explorations remain grim because of more promising opportunities in Mexico, Brazil and West Africa.

The state-owned Cuba Petroleo (CUPET) this year plans to drill a 27,000-foot-long well, the longest ever drilled on the island, according to an EFE news agency dispatch based on a Havana television news report late Tuesday. That well and others will be drilled from land in a region 60 to 100 miles east of Havana, using horizontal drilling techniques to reach deposits of heavy crude a few miles offshore, according to the report. CUPET drilled 10 such wells in 2013.

CUPET produces about half of the communist-ruled country’s oil consumption. Venezuela provides another 115,000 barrels per day, including 25,000 barrels for refining in a Cienfuegos plant owned as a joint venture by the two countries.

CUPET’s announcement Tuesday does not signal a change in the country’s plans for oil exploration, said Jorge Piñon, a former Amoco executive and now a Cuba oil expert at the University of Texas. Cuba has long been drilling wells from land to underwater reservoirs, he said, and the world’s longest horizontal well was about 40,000 feet.

Far more important for Cuba’s energy future are the prospects for drilling in deep waters, Piñon added, and those remain dim because more promising areas of the globe are attracting the companies and equipment required for deepwater explorations.

[. . .] Former Sen. Bob Graham of Florida, who was in Havana last week to discuss oil spill prevention and preparedness, said Cuban officials told his group they are negotiating with foreign companies for about 10 exploration blocks off the northern coast. The officials also said that they are convinced that large deposits of crude exist in deep waters off the northern coast and believe they will be able to resume deep water drilling at some point, Graham told El Nuevo Herald on Tuesday.

One thought on “Cuba Announces New Plans for Oil Exploration”