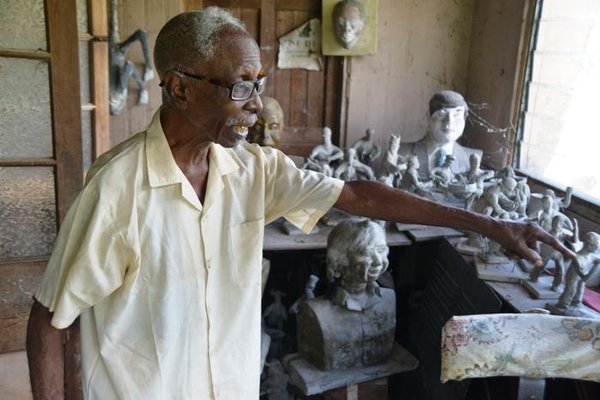 Gifted Trinidadian artist Samuel Walrond, who sculpted the statues of Trinidad and Tobago’s heroes, has died at the age of 95, The Express reports.

Walrond, who continued to work on art pieces despite going blind, passed away at his home at New Lands, Point Fortin, last Monday.

Last September, Richard Charan, in an article titled “A Sculptor of Heroes,” profiled this singular artist.

Samuel “Boy” Walrond is the most remarkable artist in Trinidad and Tobago that you probably do not know exists, and will likely never meet.
That he has never been nationally recognised for his ability, or simply for the epic span of his life’s work, is an example of society’s failure to identify and honour its heroes.
Uncle Boy, as he would like to be known, is now 95 years old and lives alone at a house in a place that is younger than him—New Village, Point Fortin.
His body, which has defied the passage of time, is now slowly failing, but his spirit is as bright as a contented child.
To pretend to capture the totality of this man in an interview of several hours (done last Thursday) would be dishonest to claim. During that time, he showed us his work, explained his technique, gave profound advice on life, exposed the Port of Spain bias, said a prayer, and recited Shakespeare learned in primary school, all the while giving a tour of his home and picking up, assembling, or caressing his most cherished creations.
It was only a long, long way into our conversation with Walrond that he mentioned it—he is blind and lives alone.
And you reassess everything you believe about the visually-impaired. But as the neighbours pointed out, this man, considered the village treasure, is fiercely independent and extremely intelligent. He has a mental map of the house and knows it so well that he can find every tool, switch and item of food. It is the reason why time has stood still inside the house.
Nothing appears to have been updated or moved since the 1980s, when his eyesight began failing. So Walrond does not live in darkness. We do, he said. 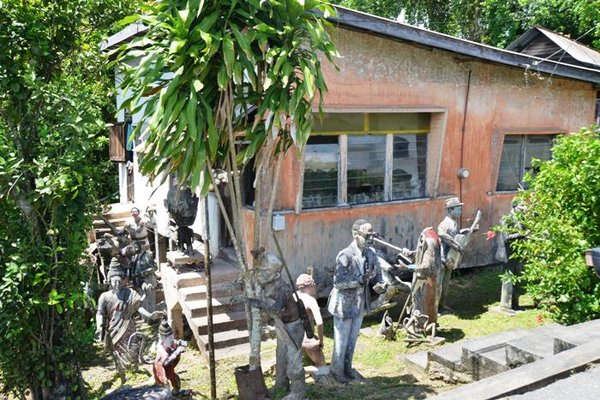 Walrond is primarily a sculptor and his medium is concrete on wire forms worked with hand-made tools. He has also done metal work, and built electrical gizmos to bring to life creations that have impressed those who have seen them.
So massive is his accumulation of work, from life-sized to miniatures, that it has spilled into the front yard, earthen ground floor, living room, porch, bedroom, dining room, and kitchen.
The house—wooden floor and walls unmaintained for decades—appears incapable of sustaining the weight of the objects.
Walrond’s work has traced important events both local and international.
He has busts or statues of American actor Sydney Poitier, United States Presidents John F Kennedy and Ronald Reagan, and boxer Mike Tyson, all made at the time these people were in the news.
He has as companions parang queen Daisy Voisin, Sir Solomon Hochoy, Hasely Crawford, Gary Sobers, Papa Bois and Mama Dlo of folklore, and the murtis of Lord Ram, Mother Lakshmi, Sita and Rawan.
The statues share space with stick fighters, Dr Eric Williams, and a headless figure of hero of the Baptist faith, the late Archbishop Elton Griffith.
They are all overlooked by a soucouyant and guarded by concrete dogs mating, and by monkeys and chickens.
“Now, gentlemen. I want to show you this,” he said, and pointed to dozens of miniatures on a table in the porch—his workshop.
The figures trace the history of pan, from tamboo bamboo in the 30s to where it is today (he has a scene where the Pope is listening to pan).
“So you are welcome, my dear gentlemen, to my paradise of art,” said Walrond, before he effortlessly gave a history of who we were; our Carnival; lost culture; showing the characters once played by masqueraders; the ass in the lion’s skin, or the race horse Rastafari, the first West Indian-bred horse to win the Governor’s Cup, in 1940.
Then Walrond cried. He said many pieces of art were being preserved, in Port of Spain, but not his. He said the works of “them” were being placed on pedestals and walls in the capital. But people had forgotten that he made the statues of the panman at the junction of Coffee and Cipero Streets, San Fernando, Marcus Garvey at Harris Promenade, or the Butlers in Fyzabad.
The politicians had sent many people to his home to catalogue and question. More came from The University of the West Indies, art instructors and students all amazed by his work.
“But it stop, and just like a jumbie parasol (mushroom) it string up and it died there,” he said.
On the wall of his home is a plaque from the Point Fortin Borough Corporation. He is pictured in the Borough’s town centre as one of its icons. However, Walrond said he feels “slighted”.
In the dining room is Dwight Yorke, in his Soca Warriors uniform from the World Cup finals of 2006.
“It brings tears to my eyes that this is still here. Dwight Yorke, he a very active fellow, he would be glad to show his football associates that he has a replica of him, so that when I as an artist is gone, and he is gone, there would be a reminder of him, and of his greatness. But I can’t get another brother, African or native black man, to say look! This shouldn’t be hidden. This should be exposed. Tourism could have had this in Tobago and it would have attracted other people to see,” said Walrond.
Walrond said he first began making figurines at age ten, in his hometown Ste Madeleine, at a time when his parents and grandparents were farmers living near what is now the Usine Ste Madeleine sugar factory.
He fashioned Christian saints, in between running the railway lines dressed in his father’s old shirts, tending to the family’s donkeys, sheep and goat at a time when a pair of alpagat (shoes) was 36 cents and you were rich if you wore shoes to school.
He settled in Point Fortin to follow the oil, working at United British Oilfields of Trinidad (UBOT), then at Shell as a machinist, moving from one facility to another until his retirement at age 64. But, as many artists will identify with, Walrond said sculpting was more important than anything else.
“I had no formal training. I feel like a fairy struck me with that. All along my life, I have been making my creations. I cannot be at peace.
Something always erupting. Something volcanic. Do this, do that. If I don’t do something for today, I feel I aint do nothing. It is in me.”
Walrond’s last big project before darkness closed in was the bust of himself and of Barack Obama.
He now works on wall plaques shaped like fish “because I have to continue work. I cannot stop”.
He would like Russell Latapy to know that he, too, is there in Point Fortin (“I have his head and limbs. I just need help now to assemble everything”). And Brian Lara, who was made when he hit his world record 375 runs, is in the front yard poised to hit another boundary.
Anyone who wants to learn the craft is welcome, said Walrond, but expect a life of poverty.
There are a few other things you may want to know about Walrond, whose siblings are all dead.
None of his children carry his name (“some I can only watch”). He started losing his sight to glaucoma in 1982 (“I have never had a brighter day, the substance of life ran low, but each morning I go outside hoping”). And he will not reveal the date of his birth (“I don’t want people coming to tell me they wish me many more”).
Asked what he wanted for his art, Walrond said: “The glory that is Rome. Tell them what you saw here. This should be shared. It is time. Let me live to see my sacrifice.”