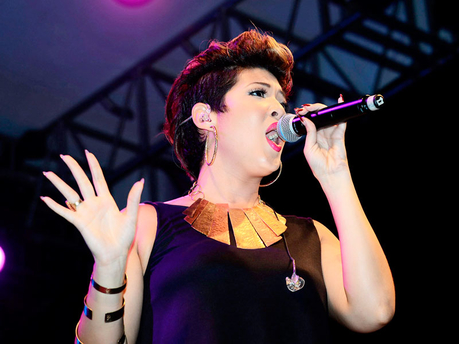 In “Tessanne Fly the Gate,” former prime minister Edward Seaga offers the broad picture, the historical context that led to Tessanne Chin’s trajectory and victory, stating that “she has opened the door to a return to history when melody ruled.” Here are excerpts with a link to the full article below.

Tessanne Chin, Jamaica’s latest international star, is no stranger to the world of music. She is the granddaughter of a well-known musical family. Her grandfather was Kes Chin, leader of Kes Chin and the Souvenirs Band, which entertained fans in the 1970s and 1980s at shows and dances. His daughter, Ingrid, formed a female band, Ingrid Chin and the Carnations. Richard, son of Kes Chin, played the drum in various bands but went on to do sound and lighting for stage shows. Fortunately, he built a home studio for his family which included Tessanne and sister Tami, another songstress. Surrounded by so much music, no wonder the family produced Tessanne as winner of the recent NBC talent show, The Voice, with huge audience acclaim by cybernet votes and spectators in the auditorium. [. . .]

‘UPTOWN’ MUSIC:  When Tessanne entered The Voice, the music was much more in keeping with the genre in which she specialises. In Jamaica, this is referred to as ‘uptown’ music, distinct from the reggae and dancehall which are popular downtown. She was on safe ground as she was performing for audiences similar to the Jamaican uptown, not downtown. She was, therefore, as we say, in her ‘ackee’, and she moved through the performances like a professional on home ground. Meantime, she was creating history by selecting songs popular here in the pre-Independence period before Jamaican popular music emerged with a bang that, within the decade, replaced much of the standard international hits of the 1940s and 1950s.

With ‘downtown’ music, the ska rhythm emerged, along with an accompanying dance style: body bent at the waist and arms swinging to a frenetic rhythm. For this to move uptown, the radio stations had to be convinced to displace some of their standard foreign recordings. The advent of the Millie Small ska ‘cover’ of Barbie Gaye’s hit, My Boy Lollipop, of the previous decade, quickly went to number two on the English hit parade and third in the USA.

MERGING OF SOUNDS:  This convinced uptown Jamaicans that with hits in London and New York, Jamaican music must be worthwhile. Soon after, RJR and the recently established JBC would join in the popularity, more so JBC, which added a one-hour Teenage Dance Party programme devoted to Jamaican music. Meanwhile, I had introduced Byron Lee, leader of Byron Lee & the Dragonaires, to ska and he immediately added it to his regular uptown Saturday night dances. Fans caught on quickly, and the downtown music became the national music of Jamaica.

Tessanne has, by virtue of her ‘Voice’ triumph using standard international hit songs, reintroduced to Jamaica the forgotten period when that type of music was popular. Judging by the enthusiastic response she has justly received, she has opened the door to a return to history when melody ruled.

A great many Jamaicans will now welcome this return after many, many years of the rhythm-based music in dancehall. Better yet, if this music gets support from other artistes who would now see it as a career opportunity. [. . .] I know that in The Voice, Tessanne sang Bridge Over Troubled Water by Simon and Garfunkel with the great passion which that hit demands. It was her standout performance. There can be others. If I had my wish, I would love to hear her sing one of Jamaica’s best love songs, Cottage in Negril, by Tyrone Taylor. Cover it, Tessanne; it’s hard to beat!

Having reopened the door to the world of sweet melodies, it is up to Tessanne to add reggae rhythms to lead off with reminders of what real reggae was before it perishes as history. Visitors coming to Jamaica want to hear reggae; they are not hearing it. Jamaicans who lived reggae’s golden years want to hear real reggae again; they are not hearing it.