Ben Miller’s crime-cracking copper has left the Caribbean whodunnit, to be replaced by Kris Marshall. Will it make a difference, asks Michael Moran in this article for bt.com.

This week sees the start of a third series of Death in Paradise. You’ve probably caught an episode or two, if only by accident. After all, Series 1 was scheduled opposite ITV’s consistently dreadful 71 Degrees North, so you had to watch something else, didn’t you?

If you haven’t seen Death in Paradise, it’s more or less Midsomer Murders scripted by Judith Chalmers. Every week a murder (or something similar) is improbably committed on the sleepy, laid-back and delightfully picturesque Caribbean island of Saint-Marie. And every week strait-laced British copper Richard Poole (Ben Miller) solves it. 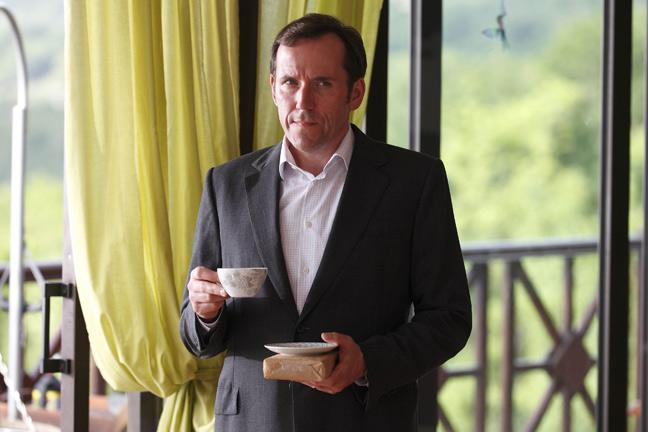 But this series is a little different. DI Poole won’t be solving its inaugural assassination. Instead Detective Inspector Humphrey Goodman (played by Kris Marshall) is called in to unravel the mystery.

He’s immediately a very different character to his predecessor, so the big question in this series will be not ‘who wielded the dagger this week?’ so much as ‘will Marshall make the cut?’

Plenty of TV shows have survived major cast changes. But plenty more have foundered after the loss of a well-loved character. Many viewers preferred Jimmy Smits to his NYPD Blue predecessor David Caruso. The X-Files tried to make a go of it with Robert Patrick after David Duchovny was scooped up into a flying saucer but the magic was gone.

Sometimes cast changes are forced upon producers through sad circumstances. Mark McManus’s death meant Taggart had to go on without its title character, while Lennard Pearce’s passing meant Only Fools and Horses lost an original cast member early on.

Neither show lost its magic, but keeping the changes minimal isn’t the only answer as less successful organisational restructures afflicted CSI, Bread and New Tricks.

Death in Paradise is still a classic, old-fashioned whodunit – and the scenery is as lovely as ever.”

A high churn of cast members can go both ways – the ever-changing cast of Spooks was like Trigger’s broom and that lasted a decade, but having a faster turnover than the Sugababes seemed to have a negative effect on Channel 4’s teenage superhero series Misfits.

What can we learn from previous cast re-jigs that will tell us whether Marshall’s Wiltshire Columbo can prove an adequate substitute for Miller’s anally retentive crime-buster?

Was Miller’s character essential to Death In Paradise? Did viewers only tune in for the contrast between the quintessentially British detective and the ineffably chilled-out Caribbean coppers? Or was it more a case of The Cosy Mystery In The Picturesque setting? That, after all, was the hook that helped retain an audience for Midsomer and Heartbeat long after the original stars departed.

On the basis of the first episode I’d suggest that Death in Paradise will live on for a few series yet. It’s still a classic, old-fashioned whodunit, complete with a wordy, Agatha Christie-inspired dénouement where the various suspects are ticked off one by one.

Crucially the scenery is still as lovely as ever, and in the depths of January, when a bitter gale is whistling through the air-bricks in the kitchen extension, that’s almost enough in itself.

Death in Paradise is on BBC One on Tuesday evenings.

For the original report go to http://home.bt.com/entertainment/tv/talkingpoints/death-in-paradise-can-live-on-without-miller-11363866591925