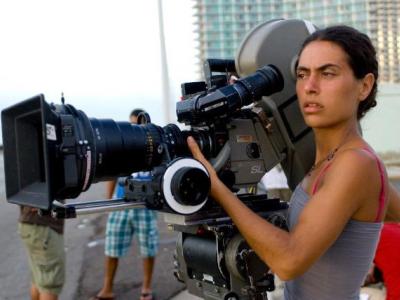 MRR: Well you’re the director of this new film, “Una Noche”, and the film obviously like we just talked about it, played at last year’s Tribeca where you won Best New Director along with several other awards. If you could, could you talk to our audience and tell us a little bit about this film?

Lucy: Yeah, the movie was shot entirely in Havana in Cuba. It’s all… Well, it’s all non-actors, so we worked together for a year, training them. We kind of built up an infrastructure from scratch because we worked outside of any institution that really existed in Cuba for making cinema. There’s no labs in Cuba either, so we were really lucky and we got sponsorship to shoot on 35 mm. But yeah, we didn’t have a lab in Cuba and we didn’t really have the facilities to work with that, so we had to fly everything back to Toronto every week or every couple of weeks. We didn’t get dailies for the movie, we got kinda weeklies. There were a lot of challenges making the film there because really, there was nothing there before we started. [. . .]

MRR: Now that the film is based on a story, right?

Lucy: Yeah. I met this young boy. I’d been in Cuba and I went out there a few years ago and from the first time I went there, I was completely struck by the place. I hadn’t ever seen Cuba or Havana, in particular, on screen before. The light there is amazing, and the colors, the textures, the city just has a real… In a way, like a very seductive charm to it, but in a way, there’s a really tragic kind of decay as well, and it was that kind of contradiction that really made me want to wanna show the place though, ’cause the system there… The whole society in Cuba is very complex and I think that I was very interested in kind of investigating that complexity through making the film.

Basically, I met this young boy who was about eight years old, who was on the seafront and I had already been thinking about, a lot about people leaving on rafts because everybody knew somebody. Everyone was telling me a story about how they themselves had tried to leave, or how someone in their family had left, and it just seemed like this 90-mile stretch was so close but such a kind of dangerous journey to take for all of these people who were actually risking their lives to take it. And so, I really wanted to find out why and what was behind this, what was the motivation. [. . .] And he started telling me this story about two boys and a girl who, at crack of dawn, one day, they got on a boat that they’d made and they set sail for the States. And that story that he told me was really tragic and really harrowing and disturbing.

MRR: One thing I wanted to talk about too is, I obviously I’ve never been to Cuba. But I wanted to know if you feel you accurately represented
life in Cuba for people in these areas?

Lucy: I think my prime objective when I was making the film was really wanting to make it feel genuine, so that when a Cuban person watched the film, they wouldn’t be conscious of whether it was a Cuban who’d directed it, or someone from another country. That was very important to me that it felt genuine and not like somebody coming in and looking at Cuba and kind of portraying it through the tourist’s eyes, as in so many movies that you see about, kind of “foreign countries” that aren’t in the US or aren’t in Europe that are kind of portrayed through the kind of, white man, male or female, going to that country and having their experience abroad, and showing it through their eyes. No, it was really important for me to actually, for the film to feel very genuinely Cuban and very authentic. And that a Cuban person could watch it and know that the kids were speaking with real voices. [. . .]

MRR: So, if you could say one thing that you found particularly interesting or fascinating about the Cuban culture, what would you say it is?

Lucy: I would say that probably, I think, in a way, the lack of media presence in Cuba and the lack of the kind of the cult of celebrity that exists here in the States, it doesn’t exist in Cuba. And I think that people in Cuba have a very strong sense of self-identity and I think that’s really unique to Cuba.

One thought on “Interview with Cuban Director Lucy Mulloy”