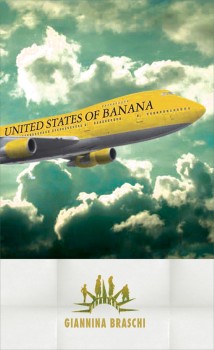 Daniel Greenfield, in “American Studies Association Celebrated Terrorism, Mocked 9/11,” an article for FrontPage Mag critical of the association’s boycott of Israel’s academic institutions, takes issue with Giannina Braschi’s reading from her novel The United States of Banana and Empire of Dreams during the Association’s convention in 2012 in San Juan, Puerto Rico. Here are some excerpts, with the link to the full article below.

The Empire referred to the United States. “Submissions reflected a concern with thinking deeply about the conceptual and methodological demands of a truly transnational American Studies,” so the program was described.

What is a transnational American Studies? An Anti-American Studies. “The very location of this year’s conference is a powerful call for reflection—reflection on indigeneity and dispossession; reflection on the course of U.S. empire; reflection on rich histories of resistance,” the president of the American Studies Association wrote. “Puerto Rico is “foreign in a domestic sense”—marked the islands as the site of the United States’ most unabashed imperialist manipulations.”

By resistance, the ASA meant a clear and explicit endorsement of Puerto Rican terrorist groups.

In keeping with this move to examine the transnational, panelists also examined the local and transnational specificities of Puerto Rican history and culture, such as Caucus: Critical Prison Studies: Prisoners of Empire: Puerto Rican Political Prisoners and Resisting U.S. Colonialism which investigates the prison as a tool of colonial domination.

But if you still haven’t had enough, then there was “celebrated Puerto Rican poet and writer Giannina Braschi” who read “from her recent
work, including The United States of Banana and Empire of Dreams.”

The United States of Banana begins by mocking the attacks of September 11 in the most gruesome way possible by featuring a businessman falling from the sky.

“It’s the end of the world. I was excited by the whole situation,” Giannina Braschi’s anti-American novel begins. “No more fear of being fired—for typos or tardiness—digressions or recessions—and what a way of being fired—bursting into flames—without two weeks notice.”

Then the novel transitions to “join the author’s alter-ego Giannina on a quest to liberate the Puerto Rican prisoner Segismundo from the dungeon of the Statue of Liberty where he has been sentenced by his father, the King of the United States of Banana, more than 100 years prior for the crime of having been born. But when the king remarries, he frees his son, and for the sake of reconciliation, makes Puerto Rico the fifty-first state and grants American passports to all Latin American citizens.”

Giannina Braschi writes further about September 11. “Banks are the temples of America. This is a holy war. Our economy is religion.”

“The suicide-bomber kills the anonymity of the crowd. Nobodies suddenly become somebodies with names, nationalities, stories, and faces. The crowd has an individual rage that is awakened when its collectivity is attacked. It’s the fear that it could happen to you—or to me—or to any one of us anytime the crowd gathers. The government worries that the roll call of the death toll will storm the polls and overturn elections and cars, businesses and samenesses. When the government proclaims war against terrorism it is proclaiming war against the awakening of the masses.”

“It doesn’t matter how often I hear: religion, religion, religion. I know deep in my heart that it is not about religion. It is about the battle of matter and spirit—the battle of the oppressed that are dispossessed—and want to possess—because they feel possessed. And they are possessed of spirit. It is the call of the oppressed to be possessed by something higher than material dispossession. After all the schisms of isms—after capitalism, socialism, marxism, communism, feminism—after separation of church and state—it is an anachronism to call it a religious
crusade when it is a global conflict between the ones who have too much and the ones who have too little, too little to lose.”

Here are the excerpts that address Braschi’s book. For the complete article follow the link below.

For the original report go to http://www.frontpagemag.com/2013/dgreenfield/american-studies-association-celebrated-terrorism-mocked-911/