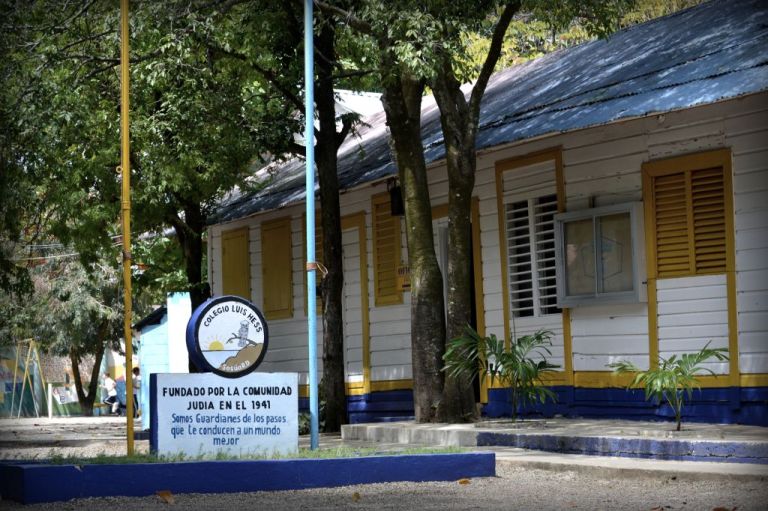 When the world closed its borders at the Evian Conference 75 years ago, one improbable nation stepped up to save a few hundred Jews from Nazi Germany: the Dominican Republic– as YANIV SALAMA-SCHEER reports for The Times of Israel. Here is an excerpt, with the link to the full article and photographs below.

SOSUA, Dominican Republic – With its bamboo roof and breezy open air design, Baily’s Cafe near the far end of Dr. Joseph Rosen Street is the perfect place to take refuge from the scorching afternoon Dominican sun.

As soon as we are seated, a waiter heads toward us with two cups of Santo Domingo, the locally produced coffee. Joe Benjamin, 73, pours two sugar packets into his rich, dark cup of coffee and gathers his thoughts; his memories are as bittersweet as his coffee.

“What we were, the community that was here, it was unique. It was special, but it’s in the past. The next generation will know us as a chapter in a history book,” says Benjamin. He takes a sip of coffee, and adds a quick, “And that’s ok.”

Benjamin came to Sosua, now a town of some seventy thousand people on the north shore of the Dominican Republic, with his parents in 1947 via Shanghai.

Originally from Beslau in Silesia, the Benjamins were among 800 recipients of visas issued by the Dominican government in the 1940s to come to this impoverished island to work the land and develop its lagging agricultural system.

Earlier this year, Sosuans marked the 75th anniversary of the Evian Conference, sponsored by US President Franklin D. Roosevelt to facilitate the resettlement of political refugees (in other words Jews) once the Nazi’s racial laws worsened the humanitarian condition in Europe. By 1938, discriminatory practices in Germany and Austria had given way to violent intimidation and sparked a refugee crisis.

The conference has been called, to paraphrase the Roman historian Sallust, “honest in face but shameful in heart.” Western Democracies across the globe shut their doors to Jews seeking asylum from the Nazi terrors in Europe, despite public expressions of sympathy by their governments at the horrors they were undergoing.

Enter one of the more unsavory and insidious figures of the 20th century.

The hero of Evian was not the revered Roosevelt, whose wife would come to be known as one of the greatest humanitarians of her time, but rather Generalissimo Rafael Trujillo, who ruled the Dominican Republic from 1930 to1961. Here was a man regarded by the rest of the world as an impersonal and violent dictator whose good deeds were fueled more by opportunism than statesmanship.

While Trujillo offered to absorb 100,000 refugees, only 800 received visas between 1940 and 1945. But neither the numbers, nor his politics, mattered much to the Jews who settled in Sosua. The Jewish community didn’t get involved in politics, Benjamin explains: “Whatever Trujillo was, [if] you asked the Jews, for us he was a savior.”

Denny Hertzberg, 75, grew up in Sosua and worked for the government overseeing industries formerly owned by Trujillo until the dictator’s death by assassination in 1961. He agrees with his old friend Joe Benjamin.

“Looking back, saving one Jew is one more Jew who would not have been sent to the gas chambers. Many more could have been saved,” says Hertzberg.

On a cold gray afternoon in 1940, Dezider Scheer sat on the docks of a shipyard in Brindisi, Italy, gazing out toward the empty Adriatic Sea, desperately searching the horizon for signs of the Greek ship that would sail him to a better tomorrow.

He describes that moment as the loneliest in his life: His eldest brother had made arrangements for him to get to Palestine through the Czech underground, but as the day turned to night, it became clear the boat was not coming and he was out of options.

It would have seemed inconceivable to him in those despondent war-torn days in Brindisi that a few months later he would be enjoying the smiles of 100 schoolchildren, all under his care as schoolmaster, playing gleefully in the tropical sun. He eventually met some fellow Slovaks who were hiding out in the upper story of a brothel near the port. That’s where the representatives from the Dominican Republic Settlement Agency (DORSA) found them.

“It was a paradise for us,” he says about the early days in Dominican Republic in a remorseful and apologetic tone as we share tea and cake. “We didn’t know what was going on Europe. We stopped thinking about it. We were living in a paradise, and they were dying in that hell Auschwitz. Peres, Ben-Gurion, they would have been proud of us. We were farming, planting, building. But what did my brothers think about it, that I was here enjoying my life?”

The life that was created in the Dominican Republic has come to be known as “Tropical Zion.”

For the original report go to http://www.timesofisrael.com/memories-from-a-fading-tropical-zion/

One thought on “Memories from a fading Tropical Zion”