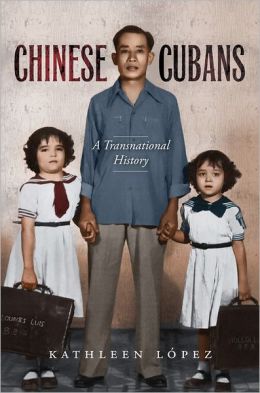 Kathleen López’s Chinese Cubans: A Transnational History was published earlier this year [see previous post Coolie Diaspora: From Indentureship to Transnational Communities]. Evelyn Hu-DeHart (Brown University) describes it this way: “Meticulously researched and beautifully written, and with a deep, nuanced understanding of the Chinese-Cuban community, this is the first serious and comprehensive history of the Chinese in Cuba.”

Description: In the mid-nineteenth century, Cuba’s infamous “coolie” trade brought well over 100,000 Chinese indentured laborers to its shores. Though subjected to abominable conditions, they were followed during subsequent decades by smaller numbers of merchants, craftsmen, and free migrants searching for better lives far from home. In a comprehensive, vibrant history that draws deeply on Chinese- and Spanish-language sources in both China and Cuba, Kathleen López explores the transition of the Chinese from indentured to free migrants, the formation of transnational communities, and the eventual incorporation of the Chinese into the Cuban citizenry during the first half of the twentieth century.

Chinese Cubans shows how Chinese migration, intermarriage, and assimilation are central to Cuban history and national identity during a key period of transition from slave to wage labor and from colony to nation. On a broader level, López draws out implications for issues of race, national identity, and transnational migration, especially along the Pacific rim.

Kathleen López is assistant professor of history and Latino and Hispanic Caribbean studies at Rutgers, The State University of New Jersey.