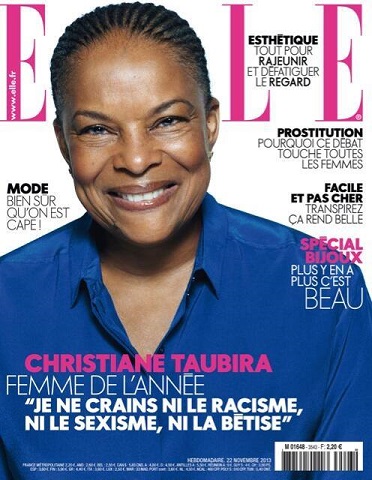 Elle magazine has picked the justice minister Christiane Taubira (French Guiana, 1952) as Woman of the Year. Taubira is a politician who was appointed France’s Minister of Justice by President François Hollande in 2012. She served as member of the National Assembly of France for French Guiana from 1993 to 2012. What I find more interesting is that she was a “driving force behind a May 21, 2001 law that recognizes the Atlantic slave trade and slavery as a crime against humanity” (Wikipedia).

Elle editor Valérie Toranian said they had chosen the minister as Woman of the Year because she had defended the gay marriage bill “with courage and eloquence” and “never put down her arms to pose as a victim.” Taubira is only the third female politician to be chosen as woman of the year, after France’s first female Prime Minister Edith Cresson and presidential candidate Ségolène Royal. 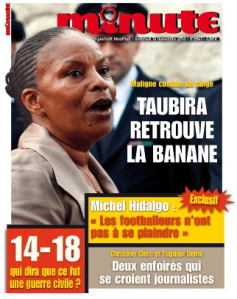 According to Connexion, her appearance on the front cover of Elle comes after the right-wing magazine Minute put her on the cover alongside the slogan ‘clever as a monkey’ and ‘Taubira retrouve la banane’ (banana also meaning smile). The French-Caribbean politician was depicted as the face of “Banania”—a brand criticized in the past for its simplistic, stereotypical depiction of Africans. In an interview for Elle magazine, Taubira spoke about recent racist attacks against her, saying that “I stick up for what I believe; the morals that inspire my commitments divide and create disagreements.”

The incidence of racist insults targeting Taubira included a post on Facebook by far-right Anne-Sophie Leclere, which her Taubira to a monkey (with a before and after photo of the minister; first as a baby monkey, and after, as a present-day minister). In an interview, Leclere said that although she thought the minister was a savage and had a devil’s smile, she was not making a racist comment by comparing her to a monkey. To top it all off, she insisted that she has many black friends (excuse me for scoffing). Leclere was finally “muzzled” by her own party Front National, who reluctantly suspended her after her demonization of Taubira, which media called a racist slip [dérapage raciste].

About these incidents Taubira said, “The irony has already struck me that I bring out strong emotions, but I admit I didn’t think they were this strong.”

4 thoughts on “Christiane Taubira: ELLE’s Woman of the Year”