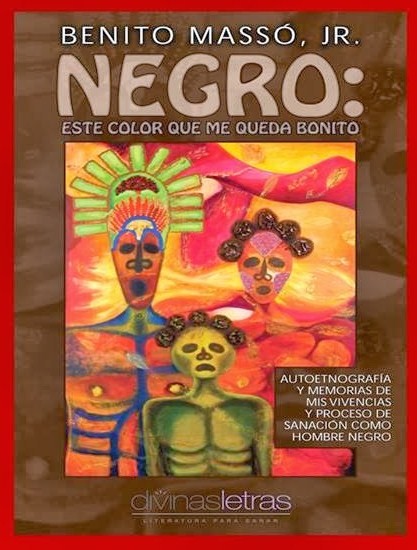 Benito Massó’s Negro: este color que me queda bonito (Divinas Letras Editores, San Juan, 2013) was launched last week at Librería Mágica in Río Piedras, Puerto Rico. In his article on the event, Daniel Nina (El Post Antillano) explains that Negro: este color que me queda bonito [Black: This Color That Looks Good on Me] is a profound reflection on being black, of African ancestry, and living in the Puerto Rican Caribbean.

Massó—a direct descendant of slaves (three generations ago)—expresses himself from his privileged status, to comment on what he has experienced and to translate it into a written work. His book was presented by fellow Afro-Puerto Rican, Professor Aaron Gamaliel Ramos, professor at the University of Puerto Rico. Ramos underlined the value of this work in the collective Puerto Rican duty of bringing to the fore the historical memory of the excluded, and how it is reflected today.

[. . .] Massó explained that his great-grandparents were slaves in the town of Guayama in the household of slaver owners whose surname he inherited. [. . .] Undoubtedly, the stories that the author tells deal with the pain of exclusion and marginalization. As he stated, “at age 48 my life changed when I discovered that I was a victim of internalized racism.”

Massó’s fellow writer and friend Mayra Santos, who was present at the activity, asked permission to say something that she felt was appropriate. The Afro-Puerto Rican author said that she would take on the challenge that Massó extended to writers, activists, and intellectuals present in the activity, to organize a group of black Puerto Ricans with the purpose of re-examining internalized racism in their lives. Fittingly, and in solidarity, writer Santos endorsed the proposal.

At the end of the evening, the emerging writer Benito Massó, as a good maroon [negro-cimarrón], invited the audience to dance to the sound of the bomba drumming at Librería Mágica. There, they charted the steps of a well-deserved freedom.