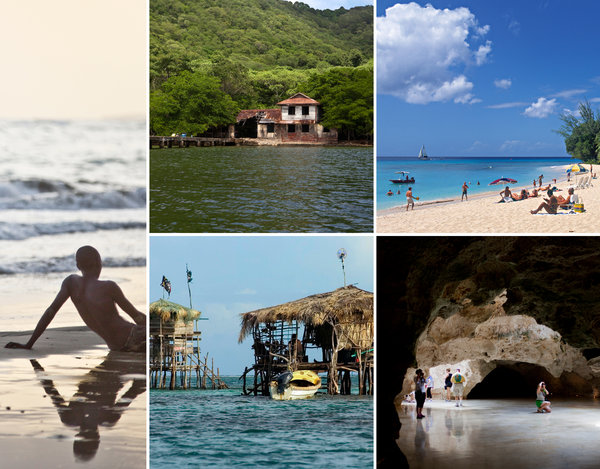 Bernice L. McFadden, Raquel Cepeda, Edwidge Danticat, Colin Channer, and Elizabeth Nunez define the Caribbean through brief vignettes. The full article is a great read, so here are just a few excerpts with the link to the full article below:

1. BARBADOS: I was just 8 years old when my grandmother announced to my brother and me that she would be taking us to Barbados for the summer.  Where is that? I asked. Her response was, in the West Indies, but I had no idea where the West Indies was or what type of people inhabited such a place. Did they all look like my grandmother or something else?

[. . .] After landing we walked out into the warm morning air, heavy with scents of sea salt and sugar cane. The sun was just beginning to glow, casting a soft light onto the surrounding pastures, dotted with grazing cows, hogs and goats.

[. . .] My first meal in that strange land was steamed fish and a molehill of something that looked like mashed potatoes, but was buttery in color, made of cornmeal and okra.

BERNICE L. McFADDEN is the author of eight novels, including “Sugar, Nowhere Is a Place” and “Gathering of Waters.”

2. DOMINICAN REPUBLIC: The lobby of the upscale resort where I was staying in Santo Domingo in late spring was a study in the colonial legacy of my mother country. There was a litter of mostly white men dressed in business casual and local women in every hue of brown feigning interest in them. The men cast knowing looks in my direction, undoubtedly mistaking me for a prostitute too.  It isn’t easy to place me. Although I was born in New York City, both of my parents are from here, and I lived nearby in Urbanización Paraíso with my maternal grandparents when I was a child. I may have been rolling sans suit, but I was in town on my own business, filming part of a documentary. While the rest of the small crew I was traveling with filed upstairs to unwind, this dominiyorkian was looking for a much-needed ice-cold bottle of Presidente beer, to reflect on my time there.

The next morning we started out at the Cuevas de las Marravillas, an ancient Taino cave about two hours outside of Santo Domingo, near San Pedro de Macorís, where my father’s mother was born. Her mitochondrial DNA revealed a direct maternal connection to the indigenous people of the island. Those original inhabitants used the caves for religious and funeral rights, and for shelter against the forces of nature that sometimes ravaged the island. One petroglyph depicted what looked like a helmeted Spaniard, which made me shudder.

RAQUEL CEPEDA is a filmmaker and the author of “Bird of Paradise: How I Became Latina.”

3. HAITI: On the southern coast of Haiti, in a town called Jacmel, a group of film students dream and create, surrounded by a super lush landscape that includes clusters of hibiscus, palm groves and birds of paradise. But the sea is never too far, crashing loudly against the cliffs and grottoes that surround Ciné Institute, Haiti’s only professional film school.

[. . .] Jacmel has seen its share of worldly visitors. (In 1816, Simón Bolívar stopped by on his way to fight against the Spanish empire in Latin America.) Recently the town has hosted international fashion shoots and its papier-mâché masks have been featured in a music video by the Grammy-award winning indie rock sensation Arcade Fire, a video that has five million views, and counting, on You Tube. Still Jacmel’s charm remains homebound. Its beaches still feel like secrets, though they are packed on the weekends by visitors and locals alike. Jacmel’s French colonial houses and their wrought-iron balconies look stately even when worn down, as though the ghosts of the wealthy coffee planters, who transported them in fragments from Europe and pieced them together on the island, were still haunting their narrow halls.

[. . .] But sometimes Jacmel tells its stories quietly. An older woman in town who is filmed for a series of short films called “Ti Koze Lakay,” or “A Little Chat at Home,” speaks of a young woman who passes over rich and flashy lovers for the poor, unassuming guy she truly loves. In many ways, Jacmel — along with the rest of Haiti — is a lot like that less flashy gentleman caller, who demands a closer look but is guaranteed to steal your heart.

EDWIDGE DANTICAT is the author, most recently, of the novel “Claire of the Sea Light.”

4. JAMAICA: I first saw the Pelican Bar in 2001, perhaps a week after it opened. I had gone to Jamaica to pursue the reckless notion of directing a literary festival in Treasure Beach, a district of red dirt, blond sheep and hazel-eyed people on the wild south coast. I was traveling with my children: Addis, boy-haired and 6-ish; and her brother Makonnen, 4, who was calm except when seawater touched his feet.

[. . .] Since that time with the children, I have gone there many times with friends, writers mostly, leaving from Jakes Hotel, where I directed a book festival for 10 short years. The authors love the leaping, the way the long bright hulls separate from the ocean, then crash into the waves. They love the rumble tumble gray sand dunes. But most of all they like the bar for what it is. To see them settled there among the regulars, cup in hand, is to witness the peculiar comfort of artists settling into kinship with an architecture that has found its own voice. There is a way they pat the slatted wood, running their hands along it without fear of splinters. There’s a delight in using hands to pull their food.

[. . .] On the way back to Jakes we cut between the shore and the Pelican, waving at the people looking out. Farther on the boat began to leap. My son complained about the water on his feet. My daughter shouted high above the engine, “Faster, go faster.” I sat quietly, contemplating what it meant to be home.

COLIN CHANNER is the father of Addis and Makonnen. He has written a few books.

5. TRINIDAD:  When it first occurred to me to write “Prospero’s Daughter,” a novel based loosely on “The Tempest,” Chacachacare, one of the largest of the offshore islands on the northwest coast of Trinidad, came immediately to mind, mirroring as it does the isolated island in Shakespeare’s play.

[. . .] Whenever I write stories about the immigrant’s longing for home I find myself writing about that road which leads to Maracas Bay where I spent some of my happiest days with my family on the beach. It is the narrowest of roads, on one side a wall of mountain, on the other plunging precipices that never fail to take my breath away: translucent mists floating among cottony clouds and sinking down to valley upon rolling valley where glistening trees of variegated greens cling precariously up the sides, and at the bottom the glorious Atlantic, big and powerful, slapping enormous waves against gigantic black rocks and pitching long, frothy white sprays high in the air. Each time I travel up that miraculous road, I press my face into the wind, I drink in the salt-filled air, I take snapshots in my mind’s eye of the trees, the flowers, the roaring ocean, and I am prepared once more for wintry days in the land I now call home.

ELIZABETH NUNEZ is the author of eight novels and the memoir “Not for Everyday Use,” to be published in April.