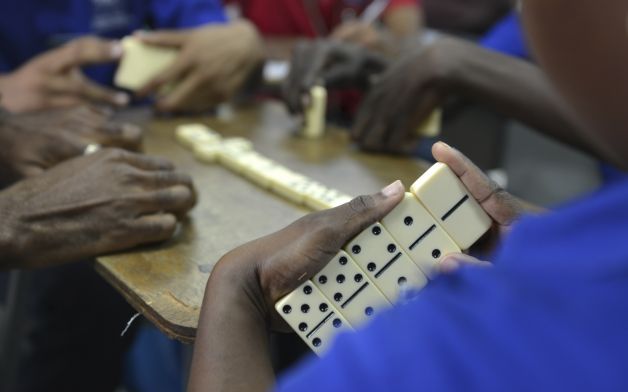 Associated Press’ David McFadden writes about the life lessons learned and the thinking skills developed in the process of playing dominoes in Jamaica. He reports on “Dominoes for Life,” a program that aims to help at risk youth in Kingston’s toughest neighborhoods.

Students from some of the toughest neighborhoods in Jamaica’s capital hunched over school desks, clacking wooden dominoes, pausing to ponder their next move and razzing opponents with good-natured taunts. “Look out, here comes the end of the game! Nobody can stop it,” said 20-year-old Chevon Brown as he boisterously slammed down a dotted tile, or “bone,” and grinned.

These young men and women aren’t just killing time. A government program is teaching domino strategies to inner-city teens and 20-somethings from gang-steeped areas in the hopes it will keep them from becoming crime statistics or give in to despair at a time when youth unemployment stands at 38 percent and good opportunities are scarce.

Call it Jamaica’s domino effect: At-risk youngsters are learning to view life through the lens of the deceptively simple game. Under the guidance of a Justice Ministry officer who devised the “Dominoes for Life” program, participants say the game is helping them work through possible outcomes and develop thinking skills as they learn how to better connect the dots in the real world. “Life is a game, just like the domino game. It’s teaching us to have patience and strategize in our own lives to get past all the blocks and barriers facing us,” said student Carlington Pryce of Denham Town, a West Kingston slum where police curfews are frequent and many young men get shot, locked up or overlooked.

The centuries-old game is deeply woven into the cultural fabric of the Caribbean, from the beaches of Barbados to the plazas of Puerto Rico. In Jamaica, it’s almost an obsession for many players, who can be seen each evening slamming domino tiles on card tables on street corners or outside rum bars in cities and rural towns. The style of play is loud and dominated by men. The government officially recognizes competitive dominoes as a sport.

The National Association of Domino Bodies, which regulates the game on the tropical island of 2.7 million people, is also teaching it in schools to improve youngsters’ self-esteem. On the group’s website, the domino diehards assert the brain game can even awaken social awareness, improve morals and boost community pride. Association Vice President Humbert Davis, who learned dominoes from his father decades ago, said struggling youngsters are riding their game tutorials to academic success. Hundreds of players between the ages of 6 and 18 attend the association’s three-week long camps. [. . .]