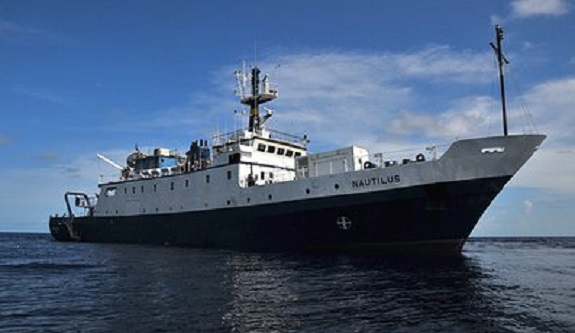 Taí Fernández brings to our attention the fascinating images, conversation, and wealth of information available on-line as the EV Nautilus conducts an expedition in Caribbean waters, providing live images streamed from a depth between 1,000 and 2,000 meters under the sea, east of the island of Montserrat’s La Soufrière volcano.

The 2013 Nautilus Exploration Program began in June and runs through November of 2013. Their Exploration Vessel Nautilus explored the Gulf of Mexico and is now studying the Caribbean Sea. Their rotating Corps of Exploration aboard EV Nautilus have been mapping the geological, biological, archaeological, and chemical aspects of these regions to depths of approximately 2000 meters.

Last week, they were closer to Puerto Rico, exploring the island’s northern coast—the Puerto Rico Trench, Desecheo Island, areas close to the British and U.S. Virgin Islands, and other areas. The website has information and highlights of the probes so far; some of the most captivating recent highlights are “Amazing Deep Sea Creatures of the Mona Block,” “Invasive Lionfish of the Desecheo Ridge,” “Watch Life in the Deep Waters of the Mona Rift,” “Sharks of the Puerto Rico Trench,” “Barracuda Bank Biology-Creatures of the Deep,” and “Behind the Science: Caribbean Volcanos.” As Taí says, “it is addictive, as scientists aboard speak live, while the underwater vehicles explore; online viewers can ask questions that the scientists answer.”

Until recently, Puerto Rican scientist Graciela García-Moliner was part of the group of scientists on board, providing explanations in both Spanish and English.

Graciela García-Moliner has been scientist and habitat specialist with the Caribbean Fishery Management Council in Puerto Rico for the past 20 years. Graciela works with fishers, government officials and scientists to develop management plans for the fishery resources of the US Caribbean. She helps coordinate the biological, environmental, social and economic information that is used to evaluate the fisheries and interacts with managers to develop fishery management strategies. She is also involved in describing the fish communities associated with the deep water snapper fisheries, including describing new species. García-Moliner graduated from Bennington College with a BA in genetics and medieval history. She has an MS (studied sex change and social interactions in the red hind), attended the Graduate School of Oceanography, University of Rhode Island and completed her PhD in Biological Oceanography (satellite remote sensing) at the University of Puerto Rico-Mayaguez (Department of Marine Sciences).

One thought on “Exploration Vessel Nautilus Studies the Caribbean Sea”