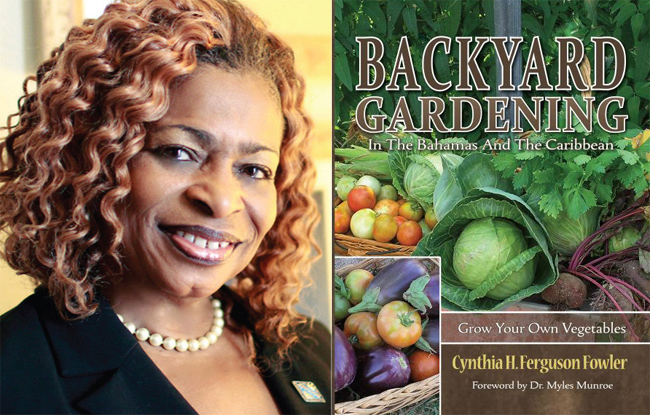 The Bahamas currently importing an estimated $1 billion in food annually and plans underway for an agricultural institute to open on the island of Andros next year, author Cynthia Ferguson-Fowler is confident that her new book Backyard Gardening in The Bahamas and Caribbean is an essential guide in a nation that is reliant on outsiders to feed them, Arthia Nixon reports for Bahamas Weekly.

With her first book Life on the Lumber Farm, Ferguson-Fowler was credited with salvaging a part of history that was going to die with the generation who had lived it, had it not been documented. This Saturday, she’s planning to launch her gardening book at Buy The Book Bookstore, Saunders Beach at 2:00p.m. Both books are available on Amazon.com and local retailers in The Bahamas. The foreword is by internationally known best-selling author, pastor and motivational speaker, Dr. Myles Munroe.

“I’m not an expert but these are some methods that I’ve practiced and saved quite a bit on,” she explained. “Due to the high cost and poor nutritional quality of vegetables today, I was encouraged to grow my own.  I later felt it was time to share the information with others who may be tired of vegetables that were chemically grown or highly laced with pesticides. The book is for the average gardener or someone wanting to start a garden and more so, for those who are looking to save some money at the grocery store.”

Ferguson-Fowler’s dedication to her mother in the book reveals that she grew up at a time when a ‘field’ in the backyard was commonplace, reminiscing on the moments she helped her mother tend their own. Littered with photographs, tips and tricks and neatly placed lists, Backyard Gardening is a reminder that The Bahamas was once a self sufficient nation known regionally as a place where you could export fruit, vegetables and even skilled farmers.

Included are chapters on fruit, vegetable and herbal gardens, types of pests to expect and how to control them, how to utilize limited space on your property, understanding climate, a planting guide, the benefits of including fruits and vegetables in your diet, creating compost, preserving a harvested crop and recipes that range from soups, to duff and other pastries, as well as energy drinks, smoothies and deserts. She even provides breakdowns of various crops and what they can be used for internally and topically to benefit the body.

“We are living in a health conscious society,” she explained the reason behind including the benefits. “Cancer cases are on the increase, many persons are without jobs and some are suffering from a multitude of health problems, stemmed from poor eating habits. I say, help yourself and your economy by turning some of that lawn into a vegetable patch or just plant some pigeon peas, sweet potatoes, pumpkin or whatever you can and ease the burden on your pocket book.”

“Yes, the book is based on Caribbean gardening, particularly in The Bahamas, put the same principles apply to residents in South Florida, as well as persons living elsewhere in the tropics,” Ferguson-Fowler noted.

And if the book sets out to be the success Ferguson-Fowler hopes it would be, she will surely be harvesting a good crop of new readers after sowing her literary seeds of success.

For the original report go to http://www.thebahamasweekly.com/publish/arts-and-culture/Bahamian_Author_Cynthia_Ferguson-Fowler_Pens_Caribbean_Gardening_Guide31153.shtml