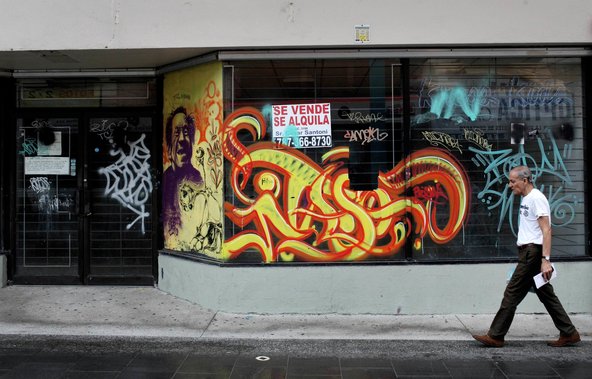 While Detroit has preoccupied Americans with its record-breaking municipal bankruptcy, another public finance crisis on a potentially greater scale has been developing off most Americans’ radar screens, in Puerto Rico. Puerto Rico has been effectively shut out of the bond market and is now financing its operations with bank credit and other short-term measures that are unsustainable in the long run. The biggest concern is that the territory, which has bonds that are widely held by mutual funds, will need some sort of federal lifeline, an action for which there is no precedent.

In a meeting with bond analysts in New York on Monday, the president of the Puerto Rican Senate, Eduardo Bhatia, said officials in the United States Treasury and White House had been analyzing the situation carefully, “wondering how they can help Puerto Rico send a very strong signal of stability right now.”

“We are waiting for some sort of an announcement from the Treasury and the White House,” he said without clarification. He also complained that analysts and investors did not appreciate the tough austerity measures that Puerto Rico pushed through in recent months.

Puerto Rico, with 3.7 million residents, has about $87 billion of debt, counting pensions, or $23,000 for every man woman and child. That compares with about $18 billion of debt for Detroit, with a little more than 700,000 people, or about $25,000 for every person in the city. Detroit and Puerto Rico have been rapidly losing population, leaving a smaller, and poorer, group behind to shoulder the burden. Detroit, at least, was able to seek relief in bankruptcy court, but Puerto Rico is in a legal twilight zone. Territories, like states, have no ability to declare bankruptcy.

[. . .] Until a few months ago, Puerto Rico was the belle of the bond markets. As a territory, it can sell bonds that pay tax-exempt interest in all 50 states, a rare and desirable trait. Puerto Rico’s bonds also pay higher interest than many others because its credit rating is relatively low — but not low enough to scare off investors. Some of its bonds were insured against default; others have special legal structures that make them seem bulletproof. The territory’s constitution explicitly states that general bond obligations have first call on all available resources. Because Puerto Rico’s bonds have these unusual advantages, investors snapped them up year after year, even as the territory’s overall debt load started to snowball. In each of the last six years, Puerto Rico sold hundreds of millions of dollars of new bonds just to meet payments on its older, outstanding bonds — a red flag. It also sold $2.5 billion worth of bonds to raise cash for its troubled pension system — a risky practice — and it sold still more long-term bonds to cover its yearly budget deficits.

After the yields on Puerto Rico’s outstanding bonds rose higher even than Greece’s, José V. Pagán, the interim chief of the Puerto Rican Government Development Bank, announced that the territory would postpone most long-term borrowing for the rest of 2013. For now, he said, Puerto Rico would rely mainly on bank credit and private placements of short-term notes. [. . .] Puerto Rican officials argue that the markets do not appreciate the tough fiscal changes that Governor Garcia Padilla has made since taking office in January. He has frozen the biggest of the island’s public pension funds, raised utility rates sharply, imposed new taxes and stepped up enforcement of existing taxes.

“I do not know a single state government, a single municipal government, that within six months of being elected undertook this amount of reforms,” Mr. Bhatia told the analysts’ group on Monday. [. . .] Analysts at the meeting told Mr. Bhatia they had been following Puerto Rico’s economy for many years and had heard previous administrations talk of great reforms, only to see deficit spending and borrowing continue. “This time is different because we have approved the legislation that you have asked us to approve,” Mr. Bhatia said, citing the pension overhaul and the sale of the island’s biggest airport to private investors. The changes were “unparalleled to any reforms that I have seen in Puerto Rico over the last 30 years,” he said, “and we are paying a very serious political price for it in Puerto Rico. I’ll be blunt — we are frustrated. [. . .] We are slowly, slowly seeing the initial results, the short-term results of our reforms. We need some breathing room. Puerto Rico is certainly doing its part.”