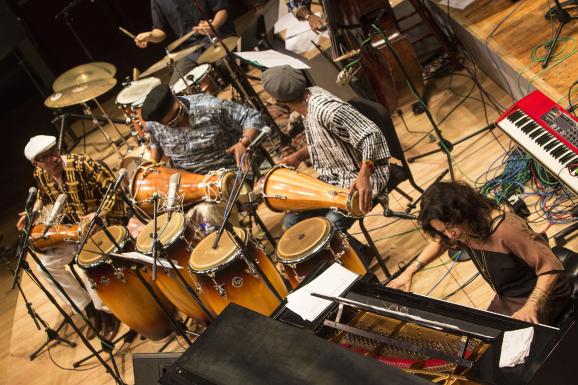 John Murph writes about new music productions that have been developing through the past few decades with the coming together of diverse talents and traditions, for example Michele Rosewoman’s New Yor-Uba: 30 Years—A Musical Celebration of Cuba in America and Francisco Mora-Catlett’s second AfroHORN.

In Henry Dumas’ short story “Will the Circle Be Unbroken?” three “afro-horns” have been forged from a rare metal found only in Africa and South America. One rests in a European museum; a second one is believed to be somewhere on the west coast of Mexico among a tribe of Indians; and a third is owned by Probe, a jazz musician. When Probe finally plays the afro-horn in public, the sound is devastatingly powerful. [. . .]

Around the same time, pianist Michele Rosewoman was getting involved in two different musical communities. While growing up in Oakland, Calif., she studied jazz with pianist Ed Kelly in the early ’70s, and befriended many members of St. Louis’ Black Artists’ Group and its Chicago-based kindred-spirit organization, the Association for the Advancement of Creative Musicians. At the same time, she was studying Afro-Cuban and Haitian percussion.  “I was in parallel worlds that didn’t meet,” she says. “In my case, I was in a jazz world that was concerned about expanding a tradition, and I was in a world that was about learning and maintaining a tradition.”

Independently, both Mora-Catlett and Rosewoman made the separate worlds of their imaginations meet by starting their own large ensembles. Mora-Catlett gathered the first edition of his AfroHORN ensemble in the early ’80s in Detroit, featuring future leaders such as saxophonist James Carter and bassist Rodney Whitaker. In New York, Rosewoman convened musicians like saxophonist John Stubblefield and conductor Butch Morris to execute her New Yor-Uba ensemble. There were certainly precursors to their visions — the Cuban fusion band Irakere, some of pianist Eddie Palmieri’s LPs — but Mora-Catlett and Rosewoman’s respective bands took the art of blending Afro-Cuban folklore and avant-garde jazz to new heights.

It took another 30 years before either band recorded its fantastical cross-cultural experiments. But earlier this month, Michele Rosewoman issued the two-disc New Yor-Uba: 30 Years — A Musical Celebration of Cuba in America. The week before, Francisco Mora-Catlett put out his second AfroHORN disc, Rare Metal (following up on last year’s debut). Both ancient and futuristic, their respective embraces of rarely explored traditions and innovative improvisation result in two of the most otherworldly Latin jazz discs of the year. [. . .] The late percussionist Orlando “Puntilla” Rios was the main Afro-Cuban folkloric guiding light for Rosewoman and New Yor-Uba. Rios was a fellow experimentalist, and tried out new ways to play folkloric Afro-Cuban music.

Unlike AfroHORN, New Yor-Uba is rooted in batá rhythms, sacred to African Yoruba culture. These mesmerizing patterns are played mostly on the batá, a double-headed drum shaped like an hourglass. Each of Rosewoman’s compositions honors one of the Yoruban Orishas — spiritual deities that represent a manifestation of God.  “These traditions are very particular,” she says. “You really don’t take certain liberties ever with the rhythms or the sequence of songs. If you took the drums and vocals on this disc and set them in a Yoruban ceremony, they would be completely correct.”

[In the photo, Michele Rosewoman (bottom right) is joined by batá percussionists in performance with her New Yor-Uba Ensemble in 2013. Photo of Credit Tom Ehrlich.]