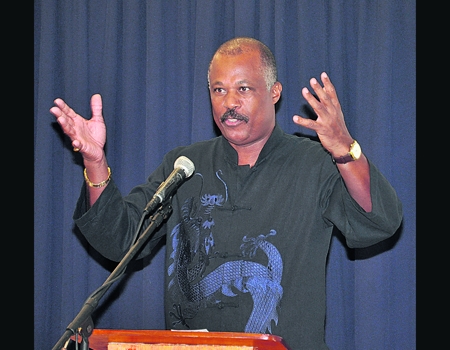 We extend our congratulations to Sir Hilary Beckles—Pro-Vice-Chancellor and Principal of the University of the West Indies-Cave Hill, Barbados, and author of the recently published Britain’s Black Debt: Reparation for Caribbean Slavery and Native Genocide—for his new appointment as chair of the Caribbean Reparation Commission. See more details in article below:

Noted Caribbean academic, Professor Sir Hilary Beckles, has been appointed to chair a Caribbean Reparation Commission that will seek to advance the region’s position on the injustices suffered as a result of the slave trade. Sir Hilary was appointed at the end of the first ever three-day Regional Reparation Conference that ended here late Tuesday.

Caribbean Community (CARICOM) leaders at their meeting in Trinidad in July had agreed to the formation of a region-wide Reparations Commission to seek compensation from Europe for native genocide and enslavement of Africans during colonisation. Member of the St. Vincent and the Grenadines Reparation Committee, Joseph Delves, speaking on the state-owned NBC radio Wednesday, described the conference as a “huge success”. He said that the Commission would comprise the various heads of the national reparation commissions. “We have also set up and appointed some five vice chairs…so that body will be the body that would be advising the CARICOM heads. “So you have your structure going forward. We also adopted the significant terms of reference for this Caribbean wide Commission and the conference ended with the public filming of the movie called ‘War’ a movie on Walter Rodney, the great Caribbean academic from Guyana.