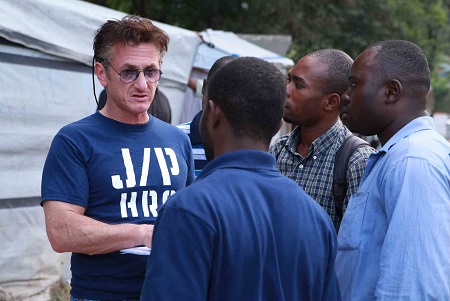 Five documentaries are to air on DirecTV channel Audience Network’s ‘Something To Talk About’ strand this fall, Kevin Ritchie reports for realscreen.com.

Presented by Brainstorm Media, the strand premieres socially and culturally relevant doc features on television and in theatres, and will kick off with Haiti Untold (pictured) on October 3.

Directed by Dan Shannon, the film follows actor Sean Penn, designer Donna Karan, retired hockey player George Laraque and others who are assisting in ongoing efforts to rebuild Haiti in the wake of a 2010 earthquake.

The other films on this year’s line-up include Mike Weeks’ Drawing Dead, a look at the world of online poker; Ben Kalina’s Shored Up, an exploration of the political debate surrounding climate change on the U.S. East Coast; Cory Taylor’s JFK: A President Betrayed, which promises new evidence regarding John F. Kennedy’s attempts to extricate the U.S. from war in Vietnam; and Jennifer Steinman’s Desert Runners, about a group of amateur runners who undertake a difficult ultra-marathon race series.

For the original report go to http://realscreen.com/2013/09/20/haiti-untold-to-kick-off-directv-doc-strand/#ixzz2fUlpLncz