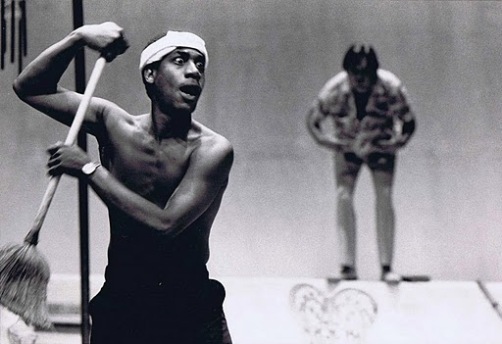 Derek Walcott’s succulent comedy Pantomime will be produced at The Little Carib Theatre next month for a limited run, Trinidad’s Guardian reports.

The play, one of Walcott’s best, will feature Michael Cherrie as Jackson Phillip and Maurice Brash as Harry Trewe. It is being directed by Brenda Hughes and produced by Fifth Business, a theatre production company.

With music composed by Raff Robertson, and choreography by Carol La Chapelle, the story takes place in 1978, in a rundown guest house in Tobago. The set has been designed by Chadd Cumberbatch, of Montserrat, and the lighting design will be by Benny Gomes.

When the play opens, guest house manager Trewe (Brash) and manservant Phillip (Cherrie) are alone in the guest house which is closed for repairs. Trewe, an old Music Hall actor, is trying to get Phillip, a retired calypsonian, to help him create a pantomime with which to entertain the guests when the guest house reopens the following week.

Trewe wants the pantomime to be about Robinson Crusoe and Man Friday, with Trewe as Robinson Crusoe. Phillip resists because he thinks it is a stupid idea, plus he does not want to be an entertainer any longer. Eventually Trewe suggests that they reverse the roles. When an enthused Phillip assumes the role of Robinson Crusoe, thus assigning the Englishman to the role of Man Friday, Trewe, upon realising the implications, calls off the pantomime. Phillip refuses to accept that and his reaction catches Trewe off-guard and nonplussed.

This hilarious comedy has sobering undertones and begs questions about (British) colonialism, the hotel industry, and master/servant relationships. It is great fun and promises to have patrons in tears and stitches from laughter, while it stimulates retrospection.

Brash, a multitalented actor, created the role of Trewe a lonely, pathetic, British expatriate consigned to “desolation” in the Caribbean in the original version of the play. This version is Walcott’s rewrite. Brash therefore brings a special resonance to the production.

Cherrie, the consummate actor, plays the servant and retired calypsonian, and has embraced the role with both arms and a creative mind. He brings an interesting interpretation to Phillip’s role. To quote Cherrie, “Jackson Phillip is one of the few good roles for a male Trinidadian actor.”

Part proceeds of the play will go to the Angels on Earth Foundation, a safe home for traumatised girls, and The Girl Guides Association. The play runs from October 11 to 13. Showtime on Friday and Saturday is 8 pm and on Sunday 6 pm.

For the original report go to http://guardian.co.tt/entertainment/2013-09-09/walcott’s-pantomime-comes-little-carib-next-month