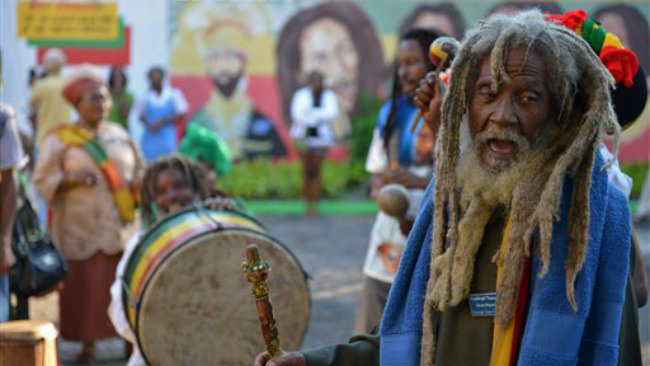 Dozens of Rastafarians gathered in Jamaica on Wednesday to brainstorm ways of pressuring European countries to pay reparations for slavery and talk about other core beliefs of the homegrown faith, the Associated Press reports.

Mostly dreadlocked and colorfully attired followers assembled in lecture halls amid a weeklong conference at the University of the West Indies campus in Jamaica, the tropical island where reggae icons like Bob Marley and Burning Spear brought Rastafari’s message to the world in the 1970s.

Rastafarians have long called for slavery reparations, a key tenet of their faith along with repatriation to Africa. A melding of Old Testament teachings and Pan-Africanism, it emerged in colonial-era Jamaica in the 1930s out of anger over the oppression of blacks and evolved into a spiritual movement.

Members have petitioned Queen Elizabeth II for compensation over the years. But the claims were rejected, and the monarchy said the British government could not be held accountable for wrongs in past centuries since slavery wasn’t a crime when it was condoned.

About a decade ago, a coalition of Rastafarian groups estimated European countries formerly involved in the slave trade, especially Britain, needed to pay 72.5 billion British pounds ($110 billion) to resettle 500,000 Rastafarians in Africa.

Now, the Caribbean Community bloc of more than a dozen nations is launching an effort to seek compensation for what they say is the lingering legacy of the Atlantic slave trade across the region. Caricom, as the organization is called, has enlisted the help of a prominent British human rights law firm and is creating a Reparations Commission to press the issue.

The bloc is focusing on Britain on behalf of the English-speaking Caribbean, France for the slavery in Haiti and the Netherlands for Suriname, a former Dutch colony on the northeastern edge of South America.

Some Jamaican Rastas, like Lion Claw, a bearded member of the movement’s Nyabinghi branch, disdain all government initiatives and are skeptical of Caricom’s efforts.

‘‘What is going on now is just the same slavers trying to benefit. Tell me, who do the governments of Caricom represent? The slaves or the slavers?’’ he said outside a lecture hall.

But other Rastas are more hopeful that the governments’ initiative can bolster their longstanding efforts.

‘‘It’s a good thing that Caricom is seeking reparations now. We need to free up Rastafari,’’ said Bongo Ernest, also a member of Nyabinghi, whose members worship the late Ethiopian Emperor Haile Selassie and believe returning to Africa would heal humanity and complete a cycle broken by slavery.

Ras Patrick Beckford, a member of the Rasta branch Twelve Tribes of Israel, believes persistence in pushing for reparations will eventually pay off.

‘‘There are those of our detractors who would want us to believe that Britain would never pay reparations. I don’t believe that. We have to be positive,’’ he told attendees. ‘‘We are going to use one country first as a stepping stone to garner what belongs to us.’’

For the original report go to http://www.boston.com/news/world/caribbean/2013/08/14/rastas-talk-reparations-jamaica-gathering/FODeHmAtL3QT6booiLWg6H/story.html

One thought on “Rastas talk reparations at Jamaica gathering”