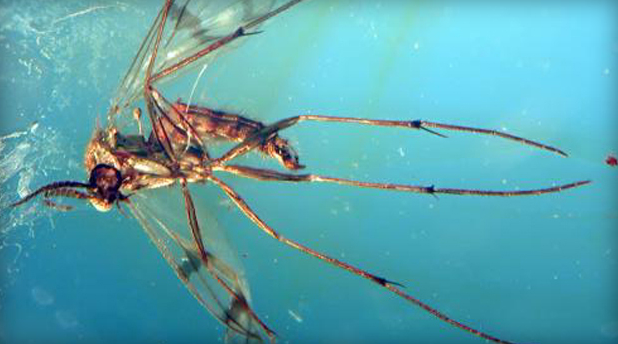 Of all the species to have named after you, a pesky fly seems an unlikely choice. But that is now the legacy of a University of Manchester professor, CBS News reports.

Dr. Dave Penney discovered the new species of fly on the Caribbean island of Hispaniola. It was fossilized inside a 16-million-year-old piece of amber from the Dominican Republic.

“The fossil represents the first record of Keroplatidae from the Caribbean island of Hispaniola,” Penney said in a statement. “It led us to predict the presence of these flies in the living fauna on the island. After a study we found the species living there.”

He named the species Proceroplatus preziosii, in honor of University of Manchester professor Richard Prezioisi, who has long supported Penney’s unfunded research into amber rocks.

“I am delighted and honored to have this newly discovered species named after me. It has been a real privilege to be able to support Dr. Penney’s research and to be associated with his discoveries of this unique aspect of biodiversity,” Preziosi said.

Dr. Neal Evenhuis of the Bishop Museum in Hawaii confirmed that this tiny gnat belongs to a new species and is part of the Keroplatidae family. It is barely a few millimeters long.

Why not name the species after himself? Penney already has two of those among the 40 or so species of insects and spiders that he has discovered in his 20 years of research.

One thought on “New species of fly identified in Caribbean”