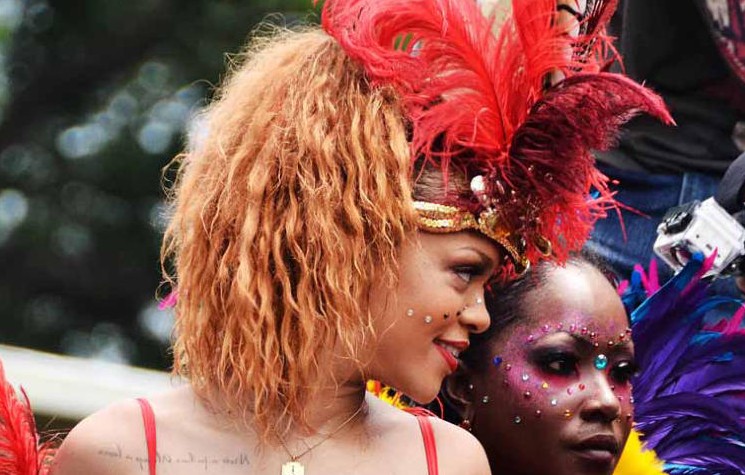 Last week, we forgot to report on the latest Rihanna news. She was elected Queen of Crop Over in Barbados—no surprise! Caribbean Intelligence raves, “Rihanna has proved once again that she is Barbados’s biggest global asset after her appearance in Crop Over made global headlines.” Across daily newspapers, celebrity magazines, and social media, most of the attention paid to Barbados’ annual event was focused on Rihanna and her costume. As the news blog states, “the Barbados Tourism Authority is not complaining.” [For more information on the Crop Over celebration, see previous post The Barbados Crop Over.]

Rihanna was dressed in a louder than life attire as she took part in a traditional Bajan Crop Over Festival on Saturday [3 August 2013]. The singer climbed aboard a float dressed in a cut-away bra top and a pair of tiny red pants flaunting her fabulous figure as she celebrated Kadooment Day. And while her scarlet locks may have gone, the bright red feathers in her hair enhanced the intricate embellishment on her costume.

Rihanna was certainly the star of the show and showed little inhibition as she played up to the crowds on the stage. At one point in the party an over-eager fan came up behind her as she bent over and the singer happily obliged by dancing with him. And when the rain started she didn’t let the wet weather ruin her mood, but took to running in the street and giggling with her pals. The Grand Kadooment is the official finale celebration of the Crop Over Festival season and Rihanna was taking part in the parade of Masquerade Bands.

“My home, my country, my people…BARBADOS!!! #1LOVE #SWEETfahDAYS NOTHIN’ BETTER! #RihannaNavy Miss u guys tho,” RiRi tweeted Saturday as she arrived home. The Bajan beauty recently wrapped up the North American leg of her Loud tour and will perform in Barbados later this week. She is also said to be nearing completion on her sixth album titled Louder.