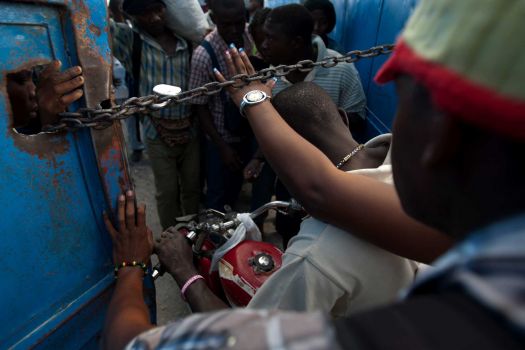 In swirling dust and sweltering sun, hordes of Haitian merchants impatient for the official opening squeezed through the battered border gate and swarmed to the myriad rickety stalls and shipping containers where Dominican wholesalers bartered off crates of juice, pasta, cooking oil and other goods.

After making their purchases, the shoppers headed back across the border into Haiti — an impoverished nation that produces little to meet the needs of its people. Haitian women carried boxes of pasta on their heads, men pushed wheelbarrows piled with bags of rice and cereal boxes and smoke-belching trucks roared down the road crammed with food and consumer goods.

This may be the Western Hemisphere’s most open border, and it’s been that way for years along the little-policed line between the two nations that share the Caribbean island of Hispaniola. But officials in both Haiti and the Dominican Republic want to control the chaotic flow of commerce and people, and their proposals are straining bilateral relations.

Tensions flared in June when Haiti banned imports of Dominican poultry and eggs saying avian flu existed on the other side. The Dominican Republic along with the World Health Organization have vehemently denied any avian flu problem, while critics say Haiti was in fact trying to protect a local producer.

Dominican merchants closed the border markets one day in June to protest the avian flu declaration, while the country’s president, Danilo Medina, threatened retaliation, saying, “We might have to take drastic measures.”

Haiti’s government now wants to cut the number of days that Dominican tax-free border markets operate from two a week to one so that it can better handle the flow of commerce. Haiti also wants to boost revenue by getting tougher on collecting import duties on goods from the markets, which the country still charges even on market days.

Medina, for his part, wants to negotiate a free trade agreement that would eliminate tariffs and better regulate trade with Haiti. That would primarily benefit the Dominican Republic, which exports far more goods.

Haiti’s efforts to control the border worry both Haitians and Dominicans whose meager livelihoods depend on the border markets. Vendors fear any restrictions will only heap more hardship on some of the hemisphere’s poorest people.

So far, Haiti has increased inspections of cars and trucks passing near the border, looking for contraband.

“If the street merchants don’t come here we can’t survive,” said Enel Floristal, a 45-year-old Haitian merchant who sells Dominican eggs to vendors from his homeland. “We can’t sell anything to the buyers and so we can’t feed our children.”

Although such customs duties are low, they can still make up to 20 percent of an item’s value. And some goods aren’t supposed to be brought into Haiti at all, such as pornography, military equipment and narcotics, but still make it in.

The northern Dominican town of Dajabon is home to the biggest border market, attracting some 30,000 visitors on market days, and its merchants worry that their families will suffer if the number of those days is reduced. 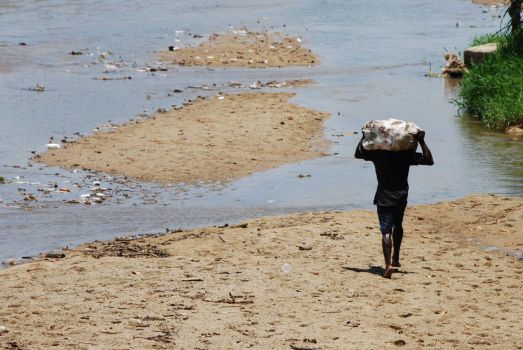 “We quite simply can’t get by, much less our families,” said Wilbert Contreras, who with his wife, Belkis, sells sandals to Haitian vendors. He said he earns only 15 pesos, or 37 cents, for each pair of sandals that he sells for 130 pesos, or $3.25.

The Dominican government’s Center for Export and Investment estimates the 14 border markets host more than 50,000 vendors and says Haiti’s informal merchants earn about $165 million a year reselling the goods back home. That’s in addition to the country’s $1.1 billion in formal exports to Haiti.

A meager $10 million in goods from Haiti goes the other way, the Dominican government says. Dominican traders sell a wide range of products, while Haitian merchants export only a limited amount of used clothing, perfumes and liquors.

The Dominican government opened the markets in the early 1990s, when a military regime ruled Haiti and the U.N. imposed an embargo. The markets have since bustled because Haiti’s ports are notoriously expensive and rife with red tape and poor infrastructure. Meanwhile, Haitian import tariffs, the lowest in the Caribbean, ensure imports flow across the border into Haiti.

Officials in both countries acknowledge that controlling cross-border trade is one of their biggest challenges.

“The significant problems that we have to address clearly, and looking into each other’s eyes, are immigration and trade,” said Fritz Cineas, Haiti’s ambassador to the Dominican Republic in July. “And we have to sit down and face them and discuss them with an open heart.”

On a recent market day, Associated Press journalists watched dozens of people climb over the concrete walls on the Haitian side of the border in Malpasse to get to the Dominican market. Once back on Haiti’s side, young men openly discarded cardboard boxes as they shifted newly bought goods into unmarked bags to elude customs agents who are empowered to confiscate items that aren’t declared at the border.

Rose-Marie Jean, a 39-year-old street vendor and mother of one, said increased inspections are making her work tougher. Haitian custom agents busted her in June as she tried to sneak in boxes of spaghetti without paying duty. She had to borrow 2,500 gourdes, or about $60, from friends to retrieve the pasta.

“Everybody is complaining that the taxes are too high,” said Jean, a merchant who’s among the thousands of Haitians who take the bus to the border each week to buy Dominican goods in bulk to sell in Haiti’s capital, Port-au-Prince.

The crackdown on the market imports has also raised complaints that the government is unfairly targeting the poor in its tax collection attempts while it gives generous tax breaks to hotel owners so they can build lodging and attract tourists.

“The only people paying taxes are the street merchants. The big shots aren’t paying them,” said Mario Joseph, a lawyer whose clients have been critical of the Martelly government.

Haitian Commerce Ministry spokeswoman Axelle St. Cyr referred the AP to two government officials who didn’t respond to phone calls seeking comment about the tax issue, or about tensions between Haiti and the Dominican Republic over border commerce.

After Haiti banned Dominican poultry and eggs, travel operators in the Dominican Republic responded by cancelling a meeting with Haiti’s tourism minister, who is trying to attract more visitors to her country.

“There will always be problems,” Martelly said, according to Haitian daily Le Nouvelliste. “Here, it’s a health issue, protect the population, to understand and to have good information.”

Still, the trade in poultry and eggs doesn’t seem to have slowed at the border. In both Dajabon and Jimani, hundreds of Haitian merchants line up on market days to buy eggs from Dominican wholesalers despite the threat of confiscation by Haitian officials.

People will keep looking for ways to get around any government prohibition or restriction, Haitian vendor Sese Chery said with a smile.

“If there’s a way to bring the goods here, they will,” she said.

For the original report go to http://www.mysanantonio.com/news/world/article/Push-for-border-control-worries-Haitian-vendors-4703474.php