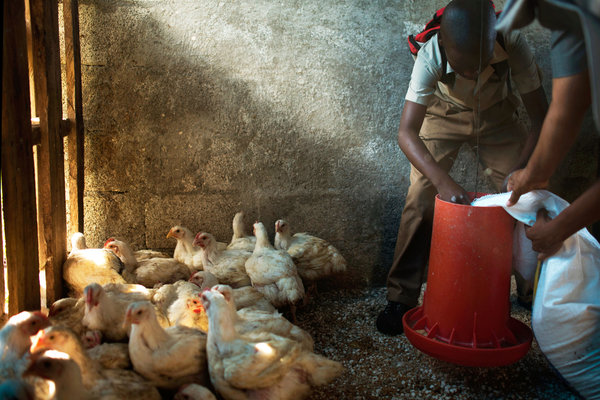 The scent of coconut oil and fiery jerk spice blows through kitchens across this green island, but as the country’s food imports have become a billion-dollar threat to finances and health, Jamaica has taken on a bold new strategy: make farming patriotic and ubiquitous, behind homes, hospitals, schools, even prisons—as Damien Cave reports in this article for The New York Times.

Across the Caribbean, food imports have become a budget-busting problem, prompting one of the world’s most fertile regions to reclaim its agricultural past. But instead of turning to big agribusinesses, officials are recruiting everyone they can to combat the cost of imports, which have roughly doubled in price over the past decade. In Jamaica, Haiti, the Bahamas and elsewhere, local farm-to-table production is not a restaurant sales pitch; it is a government motto.

“We’re in a food crisis,” said Hilson Baptiste, the agriculture minister of Antigua and Barbuda. “Every country is concerned about it. How can we produce our own? How can we feed our own?”

In a region where farming is still often seen as a reminder of plantations and slavery, the challenge runs deep, yet at regional meetings for years, Caribbean officials have emphasized that “food security,” primarily availability and access, is a top priority. Many countries are now responding, branding foreign food like meats and high-calorie snacks a threat, and locally grown food responsible and smart.

Jamaica started earlier than most. A decade ago, the government unveiled a national food security campaign with the slogan “grow what we eat, eat what we grow.” Grocery stores now identify local produce with large stickers and prominent displays.

Members of rival political parties have also been mostly unified in support of expanding agriculture by experimental means; Jamaica is now one of several countries that have given out thousands of seed kits to encourage backyard farming.

Schools are heavily involved in the effort: 400 in Jamaica now feature gardens maintained by students and teachers. In Antigua and Barbuda, students are now sent out regularly on planting missions, adding thousands of avocado, orange, breadfruit and mango trees to the islands, but in Jamaica, gardening and cooking are often part of every school day.

Teachers like Jacqueline Lewis, the acting director of a small school in east Kingston with a thriving farm, are on the front lines of what is considered a battle. That is how Ms. Lewis, 53, treats food and farming, as issues of national and local security.

A grinning disciplinarian who is quick to pull a lollipop from a second grader’s mouth, or to shout “Why ya late?” to dawdling students, she studied food and agriculture after growing up poor and walking barefoot with a grumbling belly as a child to the school where she now teaches. In 1998, she planted her first garden on a craggy strip of dirt in front of the school.

It stayed small, mostly peppers and cabbage, until a few years ago when a European development agency helped pay for a chicken coop and an expansion. Now her garden includes a second, larger plot. The government has yet to give her a cent (the agriculture minister said rural schools were the first priority), but officials have often praised her work, and so have her students.

On one recent morning, a dozen boys wandered toward her an hour before classes. Following quick directions, one group gave water to the chickens. Another, alongside Ms. Lewis, gingerly stepped into the garden to water Scotch bonnet peppers, and check if the callaloo — spinach, kind of, but earthier — was ready to harvest.

When Ms. Lewis grabbed a machete to show one shy 14-year-old how to loosen a carrot stalk, all the boys watched. When he pulled out a thick bunch, with stalks as bright as a sugary orange soda, they all cheered. “You will not go to town and find carrots like this,” Ms. Lewis said.

She later noted that many of the children came from troubled backgrounds and struggled in class. Farming, she said, gave them a reason to come: attendance and achievement have soared since the school, Rennock Lodge All-Age School, started offering free breakfast for students, usually stews made with ingredients they grew themselves.

Jamaica has always farmed — sugar and bananas, mostly — and imports have been part of the mix since at least the colonial era because grains are hard to grow in the region. But the balance tipped more significantly toward foreign food in the 1990s. From 1991 to 2001, Jamaica’s total food and beverage imports increased by two-and-a-half times, to $503 million before doubling after that.

Much of the initial growth coincided with agriculture surpluses around the world and changing tastes, as more Jamaicans favored meat and processed food. Many of the country’s 200,000 farmers cut production in the ’90s and early 2000s because they found it hard to compete.

Then came the food shortages of 2008. Storms in the Caribbean and drought elsewhere drove food prices to new heights. Jamaica found that exporting countries were holding on to food for their own populations.

With concerns that climate change will make future bad years even worse, an intensified regional focus on “food security” followed. Results have varied.

Mr. Baptiste said that Antigua and Barbuda was on track to produce half its food this year, up from only 20 percent in 2009, but most of the Caribbean has seen less astounding improvement. Jamaica’s progress, even after so many years, is subtle. Its food import bill has held steady around a billion dollars a year and though some production has grown — 79 percent of the country’s potato consumption now comes from Jamaican sources — there are still challenges of taste. “We import a lot of French fries,” said the country’s agriculture minister, Roger Clarke.

The transformation that Caribbean officials seek faces other obstacles as well. Mr. Clarke said many Jamaicans who received free seeds gave up on farming once they saw an increase in their water bills, or when thieves plundered their fields or stole their chickens.

Still, officials across the region say more young people are getting involved, partly because food prices have soared, but also because governments have promised that agriculture means steady work, and not just in the fields.

Haiti, which experienced food riots in 2008, recently broke ground on a series of silos for a “strategic food reserve,” while Jamaica is considering investments in juicing and food preservation start-ups.

“We have idle hands and arable land,” Mr. Clarke said. “We are trying to see how we can bring those two together.”

For the original report go to http://www.nytimes.com/2013/08/04/world/americas/as-cost-of-importing-food-soars-jamaica-turns-to-the-earth.html?pagewanted=all