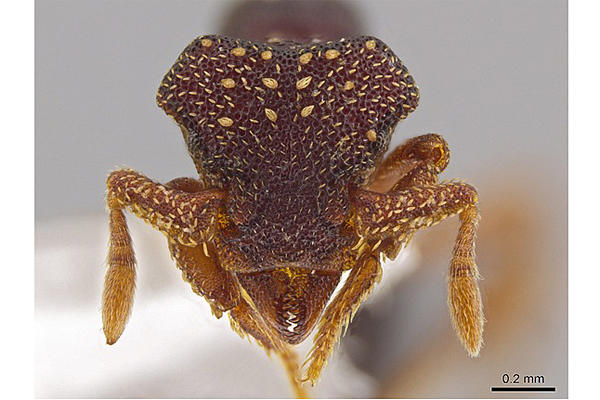 A total of 33 previously unknown ant species have been discovered in Central America and the Caribbean. The nearly blind ants live in leaf litter and rotten logs in rainforests and are all quite tiny, each less than one-twelfth of an inch (2 millimeters) in length, according to new research.

Scientists named about one-third of the ants after Mayan deities, said Jack Longino, an entomologist at the University of Utah, in a statement from the school.

“The new species were found mostly in small patches of forest that remain in a largely agricultural landscape, highlighting the importance of forest conservation efforts in Central America,” Longino said. These crawling, chomping mini-beasts perform many vital roles in ecosystems, such as aerating soil and pollinating plants.

When viewed under a microscope, they are the “stuff of nightmares,” Longino added. “Their faces are broad shields, the eyes reduced to tiny points at the edges and the fierce jaws bristling with sharp teeth. They look a little like the monster in ‘Alien.'”

One of the newfound species, Eurhopalothrix zipacna, is named for a violent, crocodile-like Mayan demon, and is found in Guatemala and Honduras. Another, dubbed Eurhopalothrix xibalba, or “place of fear,” refers to the Mayan underworld; this ant is found from Honduras to Costa Rica.

Scientists have so far recorded about 15,000 species of antsworldwide, according to the statement. But there may be as many as 100,000 in total, said Longino, who has now discovered 131 new species of ants, the statement noted. Insects in the tropics have astonishing levels of diversity, studies have shown.

About half of the new ants were described in a paper co-authored by Longino and published July 29 in the journal Zootaxa. The rest are detailed in a paper to be published shortly in the same journal. The ants detailed in the present study come from the genus Eurhopalothrix, known for the club-shaped hairs on their bodies. The latter insects in the forthcoming paper hail from the genus Octostruma, which means “eight swellings,” referring to the ants’ eight-segmented antennas, according to the release.

For the original report go to http://www.csmonitor.com/Science/2013/0801/New-ant-species!-Scientists-uncover-treasure-trove-of-ants